Idris Elba ascended yet another rung (or two) on the badass ladder Saturday after winning his first professional kickboxing match — and Madonna was front and center to capture it for Instagram.

“It has been my dream to fight in a ring properly,” the actor told Australia’s Daily Telegraph. “It is not fake, I might get hurt but ultimately I have trained for it and I like to fight … I’ve busted my nose a couple of times but hopefully it doesn’t show. Keeping fit is important to me as part of my work and I always used to train back in the day as just a kickboxer before I was acting and now I am on this massive journey.”

Elba, 44, used to kickbox back in his 20s to stay fit, but the actor never fought professionally — until now.

He was mentored by former world champions, trainers and coaches for the Discovery Networks International reality three-part documentary series “Idris Elba: Fighter,” which is expected to air in early 2017. He’s also set to star in Marvel’s “Thor: Ragnarok,” premiering in November of next year.

Madonna’s ringside appearance across the pond further fuels rumors that the material girl and the man who really should be the next James Bond are a couple.

Check out Elba’s right jab in Madonna’s video above. 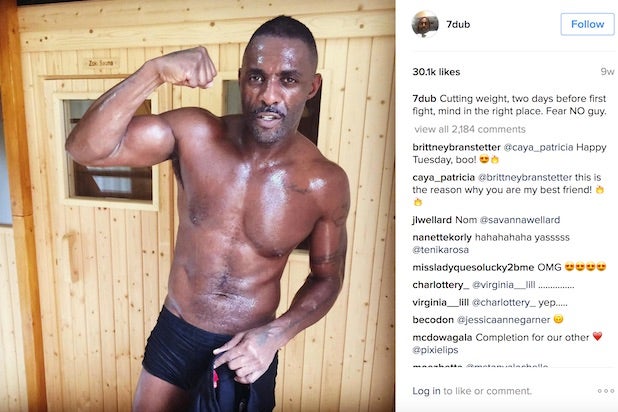 11 Stars Who Could Jolt the Emmys With Upset Wins (Photos)

From Idris Elba to Amy Schumer, here’s who could surprise us Sunday

Oddsmakers and experts aren't always right. Here are a few TV stars who could shock the industry in a big way if they pull out underdog Emmy upsets on Sunday.