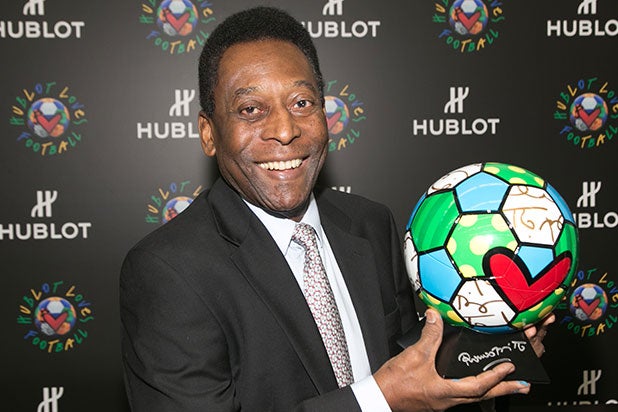 IFC Films has acquired the North American rights to “Pelé: Birth of a Legend,” the company announced Thursday.

Michael and Jeffrey Zimbalist wrote and directed the film, and it is produced by Imagine Entertainment and Seine Pictures. Academy Award-winning Brian Grazer (“A Beautiful Mind”), Kim Roth (“Inside Man”), Ivan Orlic and Colin Wilson are serving as producers.

The film chronicles the early career of legendary soccer play Pelé, depicting his impoverished childhood in Brazil to his rise as one of the leading Brazilian soccer players to win its first ever World Cup in Sweden in 1958 at the age of 17. His unorthodox style of play became widely known as “the beautiful game.”

The film was entirely shot in Pelé’s home country of Brazil, and also introduces local talents Leonardo Carvalho and Kevin de Paula, who play Pelé at the age of 9 and 17 respectively.

The film is executive produced by Pelé himself along with Paul Kemsley for Legends10, as well as Michael Rosenberg and Alexandre Dauman for Imagine Entertainment, Benjamin Mathes for Seine Pictures, and Alex Walton for Bloom.

“We could not be more proud to be partners with Pelé in the telling of his legendary and inspiring true story, and are incredibly excited to partner with IFC Films for the film’s North American release and for our film to be in the privileged company of so many of our favorite films that IFC has released throughout the years.,” said Seine Pictures founder Ivan Orlic.

The deal was negotiated with CAA and WME Global on behalf of Seine Pictures.