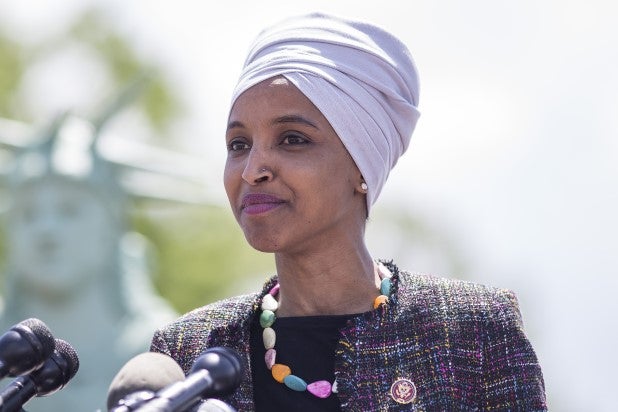 Representative Ilhan Omar responded to Trump supporters chanting “send her back” at the president’s rally in Greenville, North Carolina by tweeting a poem by Maya Angelou Wednesday night.

The Minnesota congresswoman posted an excerpt from Angelou’s “Still I Rise.”

The poem, published as part of a collection in 1978, is one of Angelou’s most famous works, and was even used in a public service announcement for the United Negro College Fund.

Along with the poem, Omar retweeted a post from actor/director Jon Favreau, who described the racist chants as “one most chilling and horrifying things I’ve ever seen in politics.”

The attendees of the rally were whipped into a frenzy after President Trump called out Omar by name and attacked her. “She looks down with contempt on the hard-working Americans and saying that ‘ignorance is pervasive in many parts of this country,'” Trump said, as the crowd booed.

“And obviously and importantly, Omar has a history of launching vicious, anti-Semitic screeds,” he added. That led to many attendees chanting “send her home.”

Even some Omar critics found the chants disturbing.

Ryan Saavedra, a reporter at the conservative site The Daily Wire and self-proclaimed “harshest critic” of Omar, said the chants were “not good.” In a follow-up, Saavedra tweeted, “like it or not, Omar is a U.S. Citizen and you can’t deport a U.S. citizen,” before retweeting another conservative account that called her a “vicious antisemite.”

Anyone who follows me knows that I cover the far-left and that includes Rep. Ilhan Omar (D-MN) and I’m aggressive in my reporting which comes from a conservative angle

With that said, chanting “send her back” at Omar is not good

Keep in mind, I am one of her harshest critics

Guy Benson, the political editor for the conservative site Town Hall and a frequent Fox News contributor, also criticized the chant as “hate-laced,” and called upon the president to stop it.

Check my feed. I’m very tough on Omar bc she deserves it, on the merits.

I am sickened by the hate-laced “send her back” chants. Shame on every person who participated.

POTUS has a responsibility to put an end to it. He alone has the ability to do so. Chant “vote her out.”

The president made no efforts to stop the chanting at the rally. In fact, his attacks on Omar have intensified over the last few days. Last weekend, Trump tweeted about Omar and three other Democratic congresswomen of color, telling them to “go back” to where they came from. (Omar was born in Somalia and is a naturalized U.S. citizen).

Trump did not directly address the chants following the rally, instead posting a series of tweets thanking Greenville and pitching the Republican National Convention that will also take place in North Carolina next summer.

Late Wednesday evening, Omar followed-up tweeted a photo of herself standing in the House of Representatives and the caption “I am where I belong, at the people’s house and you’re just gonna have to deal!”

??’????? I am where I belong, at the people’s house and you’re just gonna have to deal! pic.twitter.com/W0OvDXGxQX