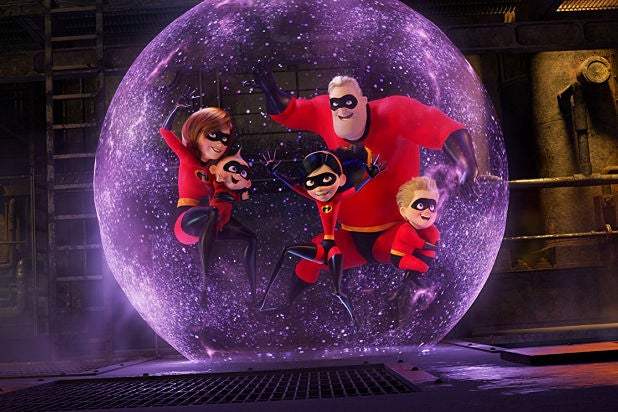 The sequel to “The Incredibles” is looking at a weekend opening of $120 million to $145 million.  The first “Incredibles” opened to $70 million in 2004, and “Incredibles 2” will still have a higher opening than its predecessor even after inflation adjustments are made.

Also Read: 'Incredibles 2' Film Review: Pixar's Superhero Family Is Back, Baby - and What a Baby

Taking place right after the end of the first film, “The Incredibles 2” sees the Parr family face a new family dynamic after Elastigirl is recruited for a campaign to help bring superheroes back. While she fights the bad guys, Mr. Incredible is left to take care of his three kids, including the infant Jack-Jack, who begins to develop his own powers.

Also Read: Does 'Incredibles 2' Have a Post-Credits Scene?

“Tag” is based on the true story of a lifelong group of friends who played a game of tag for 23 years. The film stars Ed Helms, Jeremy Renner, Jon Hamm, Hannibal Burress, and Jake Johnson as the crew of friends, with the cast completed by Rashida Jones, Isla Fisher, Annabelle Wallis, Leslie Bibb, Brian Dennehy, and Lil Rel Howrey. Jeff Tomsic directed from a script by Rob McKittrick and Mark Steilen.

Sony/Silver Pictures’ “Superfly” opened on Wednesday and is looking to earn $7 million to $12 million over the five days., with the film sporting a reported budget of $16 million.

Samuel L. Jackson is reprising his role as John Shaft in "Shaft", which comes out this Friday. Scroll on to discover some little-known facts about the acclaimed actor. Trust us when we say: You'll likely be surprised by at least one of them.