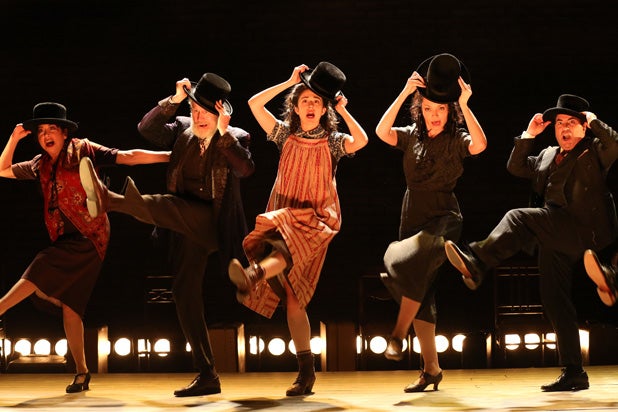 It’s the Jewish “Shuffle Along.” Paula Vogel takes a forgotten but seminal work, Sholem Asch’s “The God of Vengeance,” and tells the backstory of its incredible journey in her new play, “Indecent,” which opened on Tuesday nearly a year after its premiere at Off Broadway’s Vineyard Theatre with much of the same cast.

Vogel gives us much of Asch’s plot in her new play, and what a story it is! “The God of Vengeance,” which bombed the year after “Shuffle Along” opened, featured a story so controversial that its producer and cast were found guilty of giving immoral performances.

A respected Jewish businessman keeps a brothel in the basement of his home. His wife is an ex-hooker, and the two set out to prevent their daughter from learning the sordid truth. Instead, she falls in love with one of the female prostitutes, and the play ends with dad hurling the Torah at her.

The story, as told by Vogel, gets better. “The God of Vengeance” actually had its world premiere in 1907 in Berlin, and after traveling throughout Europe it opened in New York City in a Yiddish theater on the lower East Side. There were no censorship problems even when it was translated into English and played the historic Provincetown Theater in Greenwich Village in 1918. Only when it went to Broadway did the censors descend.

Actually, the producer self-censored the play prior to Broadway, excising the famous “rain” scene in which the daughter and the prostitute make love. Before Broadway, the women’s relationship was celebrated. After the cuts were made, the prostitute became an evil seducer of the young girl.

I’m a total sucker for plays, movies and books about little known events that completely shake up our sense of history. Four black guys wrote a successful Broadway musical in 1921? Lesbian love was glorified in a popular Yiddish play in the early 20th century?

Vogel tells her complicated, sprawling story with urgent economy. She uses the rain scene, enacted by Katrina Lenk and Adina Verson, as a leitmotiv. The words remain the same (and they’re pretty graphic), but the meaning keeps changing, growing. The hurling of the Torah by the father (Tom Nelis) is also repeated often.

With a title like “The God of Vengeance,” you might think you’re in for a real night of penance at the theater. On the contrary. Under Rebecca Taichman’s dazzling direction, much humor is exposed, especially with the repeated hurling of that Torah. Also, Vogel nicely details the personalities within the Yiddish troupe. They’re a seasoned, worldly bunch (Mimi Lieber as the actress playing the ex-prostitute mom is especially droll), and their various reactions to the charges of indecency and anti-Semitism run the gamut.

Vogel and Raichman (they take co-creator credit) weave a very eclectic score into the fabric of “Indecent.” Much of it is original, by Lisa Gutkin and Aaron Halva. But there are also show tunes and pop songs of the period and choreography by David Dorfman. “Indecent” is practically a musical.

At the center of Vogel’s play, but often in the wings, is Asch (Max Gordon Moore, Tom Nelis). Vogel wisely makes him an enigma, as all great artists must be. He wrote “The God of Vengeance,” but despite its great success he gave up the theater to write novels and essays.

He didn’t appear to have much interest in what happened to his play, even when it came to the infamous cuts for Broadway. He later prevented “The God of Vengeance” from being performed, making both Asch and Vogel’s play about him utterly fascinating.