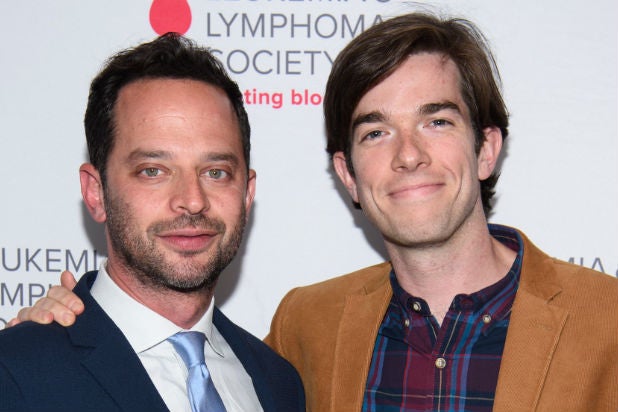 Nick Kroll and John Mulaney are a formidable comedy team across platforms — having reverse engineered the hit Broadway play “Oh, Hello” with their old-man Manhattanite characters from their web series.

On Saturday, the pair will host Film Independent’s annual Spirit Awards, honoring the best in indie filmmaking, live from the beach in Santa Monica, California.

TheWrap caught up with the pair to discuss their previous experiences in award show writers’ rooms, how they’ll one-up social media hawking late night hosts and the inevitable addressing of President Trump and the country’s political climate:

TheWrap: The Spirit Awards are a pretty grounded show. You don’t have the same fodder as the zany Hollywood Foreign Press or the older Film Academy.

John Mulaney: Film Independent is an amazing group. They support young filmmakers and diverse filmmakers, and there’s nothing wrong with a different set of people picking and curating these kinds of films.

I know you two have previously written award show patter. Are there any conventions of these shows that you hate or will avoid?

Nick Koll: We feel like hosts don’t make the shows about themselves enough.

JM: We’re really going to double down and make it about us and not these people and these artists. We’ve asked for no audience cutaways.

It seems like Late Night or Daytime talk show hosts dominate these events these days, and they’re all chasing the same thing — some big social media moment. Will you follow suit?

NK: We don’t have the budget for a group selfie. We’re going to have everyone email an individual picture of themselves to one frazzled prop department guy, who will try to piece them all together and make this sort of family history.

What movies are you rooting for?

NK: I’m really excited for Jeff Nichols, Ruth Negga, the whole team from “Loving” because I’m in it, and it raises my profile.

I think a lot of people are expecting you to go in on President Trump.

JM: Wouldn’t it be funny not to, though? Like, if all the jokes are about a mother-in-law’s bad cooking?

NK: It’ll be topical in the sense that John is going to come out and apply eczema [cream] on me.

John, you were a writer for Seth Meyers when he took on the White House Correspondents Dinner as host.

JM: Yeah and, famously, that Seth performance really riled Trump up. We’re hoping to take some swings like that.

Who, if anyone, will take the job helping Trump write his response jokes?

You close on Broadway soon, and “Oh, Hello” has been such a hit. Are you thinking about the possibility of the Tonys?

JM: Like, are we already making room in the house for Tonys?

NL: We are a big fan of the Tonys. Tony Shalhoub. Tony Montana. Any of them.

Nick mentioned he appears in the drama “Loving.” John, do you ever want to cross the aisle and do something that’s not comedy?

JM: Are you offering?

JM: I’m already on hold for the lead in a Stanley Tucci biopic. Are you saying it’s off?

Last question. Awards shows are as much about fashion as they are about film now. Will you coordinate outfits?

NK: Yes. We’re a big fan of the Power Rangers. I might be the black one, and John will be the red one.

JM: Yes, but the ones on Hollywood Boulevard, who are kind of dirty.