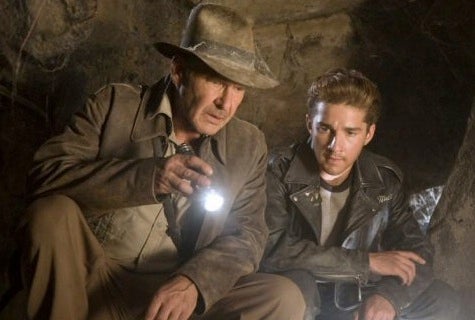 Indiana Jones wlll head for the Bermuda Triangle in his next big-screen adventure, according to the New Zealand branch of the men’s magazine Stuff.

Paramount denied the report and a spokesman for director Steven Spielberg told TheWrap that the rumor was "false," adding that the project is still in the "research phase" and "will definitely not be filming next year."

Still untitled, the fifth film would involve the mystery surrounding the mysterious area in the Atlantic — and the location does offer a lot of promising possibilities.

Stuff reports that "George [Lucas] and Steven [Spielberg] have been working on a script and it’s almost there. Harrison [Ford] is on stand-by for filming next year. This looks like [it will be] an emotional and exciting conclusion to the franchise, with Indy facing his biggest challenge yet."

Stuff’s — unnamed and uncredited — added that "Shia LaBeouf has a central role again as Indy’s son, but this will be a blockbuster made in the old-fashioned way rather than the CGI efforts of the last movie."

What is known for sure is that Ford has expressed interest in returning to the fedora one last time, and last year, LaBeouf told the BBC that Spielberg had "cracked" the story for a fifth (and likely final) adventure, although no writer has since been hired to deliver a screenplay.

Slash Film points out that in 1992, LucasArts released a CD-Rom adventure game titled "Indiana Jones and the Fate of Atlantis," so it’s entirely possible that the infamous Lost City could be at the center of the Bermuda Triangle. Atlantis was rumored to figure into the fourth installment of the franchise until filmmakers went a different way.

Atlantis is also rumored to be a part of "National Treasure 3," which is currently in development at Disney.

2008’s "Indiana Jones and the Kingdom of the Crystal Skull" grossed $786 million worldwide, but it was attacked by critics, fans — and co-stars alike.

While at the Cannes Film Festival to promote "Wall Street: Money Never Sleeps" last month, LaBeouf told the L.A. Times that he felt like he "dropped the ball on the legacy that people loved and cherished … You get to monkey-swinging and things like that and you can blame it on the writer and you can blame it on Steven [Spielberg], but the actor’s job is to make it come alive and make it work, and I couldn’t do it. So that’s my fault. Simple."

LaBeouf added that he and Ford "had major discussions. He wasn’t happy with it, either. Look, the movie could have been updated. There was a reason it wasn’t universally accepted … We need to be able to satiate the appetite. I think we just misinterpreted what we were trying to satiate … Steven needs to hear this … He’s done so much great work that there’s no need for him to feel vulnerable about one film. But when you drop the ball you drop the ball."