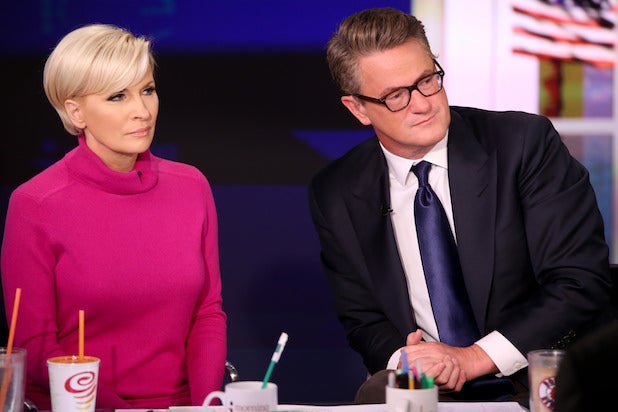 A decade into their run, MSNBC’s “Morning Joe” co-hosts Joe Scarborough and Mika Brzezinski are more influential than ever. If you want to know the secret to their success — it’s best that you ask them separately.

When the recently-engaged couple spoke with TheWrap earlier this week, Scarborough and Brzezinski often finished each other’s sentences and credited each other with the show’s success. Their chemistry was obvious, even more so than it is on television — but perhaps that is the secret to their success.

“Morning Joe” launched roughly a decade ago in 2007, the exact date depends on whether or not you consider the trial period, but it’s safe to say the show is currently celebrating its 10-year anniversary.

It all started when MSNBC needed to replace Don Imus’ “Imus in the Morning.” At the time, Scarborough, a former Florida Congressman, hosted the primetime “Scarborough Country,” but was eager to move to the a.m. and had a vision for what would eventually become “Morning Joe.”

Brzezinski considered herself a “washed up TV news anchor” when Scarborough approached her about being his co-host for his then-temporary shot to replace Imus. He only knew her casually because she anchored news alerts during his primetime show. She was working as a freelance anchor for the network and had “no idea” what she could bring to the table of a morning show.

“I think there have been a lot of imitators,” Brzezinski told TheWrap. “Not only on cable, but on network. It made TV better. I think ‘Morning Joe’ has made TV better.”

Brzezinski said that Scarborough’s raw talent and political chops were crucial to the show’s success initial success, noting that he “raised the bar” and was influential in discovering fellow co-host Willie Geist.

“Right when the red light came on, I was like ‘Wow,’ he’s good, this is good and we’re going to be great,'” Brzezinski said.

At this point in the interview, Scarborough interrupted his fiancée, with his voice getting louder and clearer as he spoke, as if he was a few steps away from the phone while Brzezinski credited him for their success.

“That was very, very nice of Mika but the incredible thing to me, really is, that Willie, Mika and I have been a team for 10 years,” Scarborough told TheWrap. “Has that ever happened before in TV news where three hosts stayed together and actually [Brzezinski could be heard finishing his sentence in the background] liked each other?”

Scarborough said he’s happier than ever before and the trio’s rapport is stronger than ever. Despite the show’s namesake praising the entire team, Brzezinski is clearly thankful that Scarborough approached her to join the program that would change her life back in 2007.

“I will just tell you, I do hand it to Joe for coming up with this concept and knowing exactly what he wanted to do. He wouldn’t say that but I still can’t believe the success in some ways, and in other ways I’m not surprised at all,” she said.

Also Read: 'Morning Joe' Warns Trump: 'If You Lie in Front of a Grand Jury, You're Going to Get Impeached' (Video)

One thing Joe and Mika agree on is the impact Griffin had on the show.

“We had a boss that trusted us … the cable news tides were going in a very different direction, and he let us breathe,” Brzezinski said.

Scarborough said when the show started he was instructed to “shrink the news hole” and do “more entertainment news,” which is historically a morning show staple. Joe and Mika had other ideas and wanted to emerge as the show that sets the daily agenda for political watchdogs.

“Mika has been nice, talking about me, but the first time that people really took notice was when Mika was given scripts, by the news desk, to lead the show with Paris Hilton getting out of prison,” Scarborough said. “She tore up the script and said, ‘We’re not gonna do this.'”

Scarborough actually downplayed the details, as Brzezinski ripped up the script several times and even attempted to burn it with a lighter. Seriously.

A meeting was arranged (it wasn’t by Griffin, they both emphasized when telling the story) to discipline Brzezinski for what networks execs considered being disrespectful to the news department — but the meeting didn’t occur.

The clip quickly went viral on YouTube and a star was born.

“By the time she was supposed to go to the meeting, I think there were five million hits,” Scarborough said. “She really set the tone.”

The media power couple said they have not been handed a news script since that point. They are left alone and have “total freedom” to decide what topics to cover.

“Phil Griffin said to everybody, ‘Hey, back off … let them do the show they wanna do,'” Scarborough said.

Griffin’s approach paid off and the show emerged as must-see TV for political insiders. “Morning Joe” has beaten CNN’s “New Day” among total viewers for 39 straight weeks, and has topped its rival among the key news demo of adults age 25-54 for seven consecutive weeks. The show is watched by political influencers and trends on social media on a daily basis — Joe and Mika even have an ongoing Twitter feud with the President of the United States.

A decade after Scarborough asked the self-proclaimed “washed up” anchor to join him on “Morning Joe,” they are arguably the most influential couple in media.

“Morning Joe” will officially celebrate its 10-year anniversary on Sept. 22.