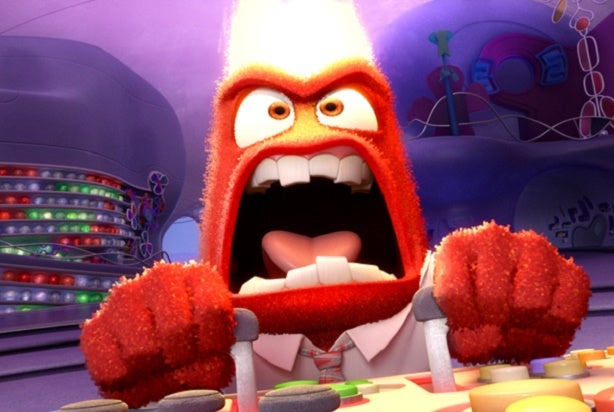 Pixar Animation’s “Inside Out” has finally brought down the dinosaurs at the box office. Monday’s final figures show that the Disney family film finished the weekend with $29.7 million, and “Jurassic World” had $29.2 million.

That reverses the order of their finish reported Sunday, which had Universal’s “Jurassic World” in the top spot with $30.9 million, just ahead of “Inside Out” with $30.1 million in second place. The Sunday numbers are based on the studios’ projections of Sunday grosses.

It’s the latest chapter in what’s been a fun ride for two of the summer’s biggest hits, which have dominated the box office for the past three weeks. The flip-flop for the top spot means that “Jurassic World” will not get its fourth consecutive weekend win and that, after two weeks of finishing second to the sci-fi sequel,”Inside Out” will get its first No. 1 finish.

No one at Disney was crowing Monday, but the team there has to be feeling some satisfaction.

In the course of its stunning run to become 2015’s top-grossing movie, “Jurassic World” snapped Pixar Animation’s string of 14 consecutive No. 1 openings when it held off “Inside Out” for the win on the June 19 weekend. The dinos had to post the biggest second week ever to do it, with $106.5 million. Writer-director Pete Docter‘s animated hit delivered the best opening ever for a movie that didn’t debut at No. 1 with $90.4 million, which was also the best opening ever for an original movie.

One weekend before that, “Jurassic World” debuted to $208.8 million, breaking the record for the biggest three-day opening weekend ever held by Disney/Marvel’s “The Avengers,” which set the mark with $207.4 million in May of 2012.

Also Read: 5 Reasons 'Inside Out' and Pixar Aren't Sweating End of Win Streak

Weekend races and rivalries aside, both films have had runs that have far exceeded expectations.

“Jurassic World,” directed by Colin Trevorrow and starring Chris Pratt, is now the fourth-highest grossing film ever domestically, with more than $550 million, and the fifth-highest grossing film worldwide with $1.38 billion after four weeks in release. No film has ever crossed the $1 billion mark at the global box office faster than the sequel to Steven Spielberg‘s 1993 sci-fi classic, which did it 13 days after its June 12 debut.

“Inside Out” has taken in $246 million and $117 million from overseas to reach its $365 million global total. Amy Poehler, Bill Hader, Mindy Kaling, Phyllis Smith and Lewis Black supply the voices in “Inside Out,” which is set inside the mind of young girl Riley.

The Pixar hit has helped push Disney past the $3 billion mark at the global box office for the sixth consecutive year and the ninth time ever. That’s the fastest the studio has ever reached this threshold, significantly outpacing last year’s record set on Aug. 5, on the strength of “Inside Out,” “Avengers: Age of Ultron” and “Cinderella.”