Instagram’s assault on all-things distinct about Snapchat is approaching total war with its latest update.

The popular photo sharing app synthesized two of its most glaring Snapchat ripoffs Thursday, combining its Direct feature with Stories. Users are now able to respond to their friends’ Stories with a disappearing picture or video, whereas, in the past, they could only send a text reply.

Instagrammers can add face filters or loop their replies with Boomerang after tapping the camera icon alongside a Story’s text box. Just like its first iteration of Direct, the replies will vanish — and friends will see if you screenshot their pics.

Even its marketing pictures for the update — with two happy, teenage users trading messages — come off as a play for Snapchat’s young demo. 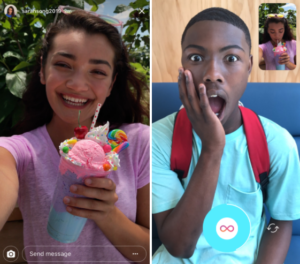 The update may seem minor, but Instagram continues to chip away at the features that set Snapchat apart.

Instagram Stories — its initial push to recreate one of Snapchat’s core elements — now boasts 250 million daily active users. Snapchat, on the other hand, reported “only” 166 million DAUs in May. And although it recently announced 375 million monthly Direct users, Instagram has been mum on how many of them use its disappearing function.

Disappearing messages, of course, have been the hallmark of Snapchat since Evan Spiegel launched the company in 2011. Now, after turning down a buyout offer from Mark Zuckerberg, Facebook-owned Instagram is looking to bury its rival, one copied feature at a time. By combining Direct with Stories, it gives users one more reason to consider ditching Snapchat.