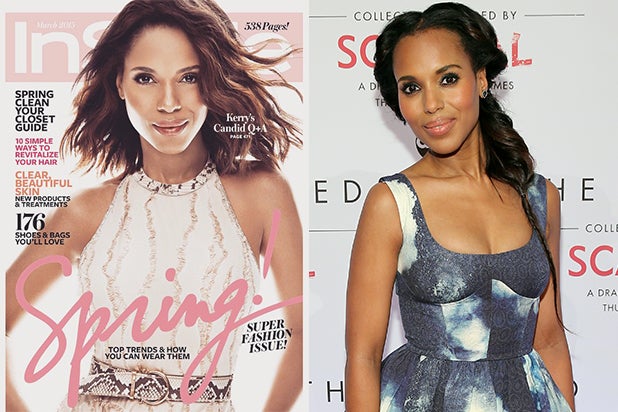 Social media lit up Thursday after the “Scandal” star unveiled her latest cover on social media, showing a much lighter-skinned Washington than fans are used to seeing.

The new cover shows Washington lit from below in a white, shoulder-baring dress.

See video: ‘Scandal’ Mind Trip, ‘How to Get Away With Murder’ Secrets Exposed as TGIT Returns

Washington was “thrilled” with her new photo, telling her fans on Instagram, “So honored. And crazy excited.”

But the reaction from her fans was anything but.

Shrunk her lips, lightened her skin and she is thrilled. Wow… http://t.co/9eF6UlzL80

Was what #InStyle did with the cover featuring @kerrywashington deliberate? They say no. Harsh lights can do a lot but….

As talk turned to outrage, InStyle quickly issued a statement denying it altered Washington’s skin tone, blaming it instead on “lighting.”

“While we did not digitally lighten Kerry’s skin tone, our cover lighting has likely contributed to this concern,” the magazine explained in a statement. “We understand that this has resulted in disappointment and hurt. We are listening, and the feedback has been valuable. We are committed to ensuring that this experience has a positive influence on the ways in which we present all women going forward,” they added.

Kerry responded saying she was glad people were talking about it.

“@InStyle: On KWs Cover: http://t.co/NKzbNwimYP” Beautiful statement. Thank u 4 opening this convo. Its an important 1 that needs to be had.

This isn’t the first time Washington has faced criticism over a magazine cover; her December/January cover of Lucky magazine came under heavy scrutiny, as some fans believed Washington’s image was excessively altered with digital editing software and rendered the actress unrecognizable.