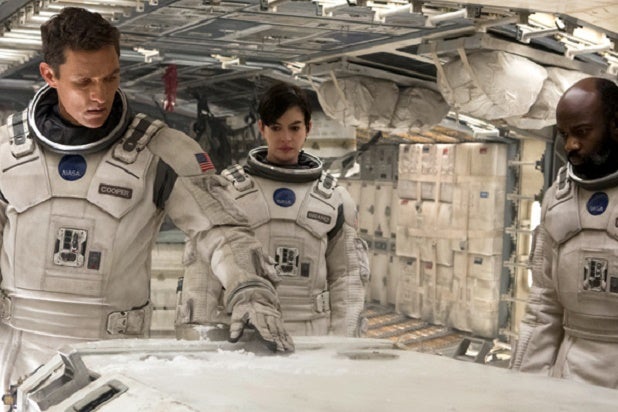 Christopher Nolan‘s “Interstellar” launched its global run by taking in $80 million from 62 foreign markets this weekend.

With the $52.5 million that the Matthew McConaughey space epic earned domestically, the global total for “Interstellar” is $132.5 million, according to foreign distributor Warner Bros. Its U.S. rollout is being overseen by Paramount Pictures.

The foreign numbers are on pace with those of another space epic distributed abroad by Warner Bros., last year’s Sandra Bullock-George Clooney thriller “Gravity,” the studio said. That one debuted with $27.4 million from 27 countries last October.

Alfonso Cuaron‘s epic was in 3D and benefited from the accompanying upcharges and had a considerably shorter run time — “Interstellar” goes nearly three hours — so the showing by Nolan’s film is encouraging. “Gravity” wound up taking in $442 million from overseas, and $716 million globally.

As they did in the U.S., IMAX screens played a major part in the success of “Interstellar,” delivering $7.2 million from 206 theaters for a $35,000 average. The global IMAX take of $20.6 million is the best ever for a November opening, ahead of the $17.1 million run up last year by “The Hunger Games: Catching Fire.” And it is the best-ever opening ever for a 2D, non-sequel in IMAX.

It should get a big boost Wednesday, when it opens in China.