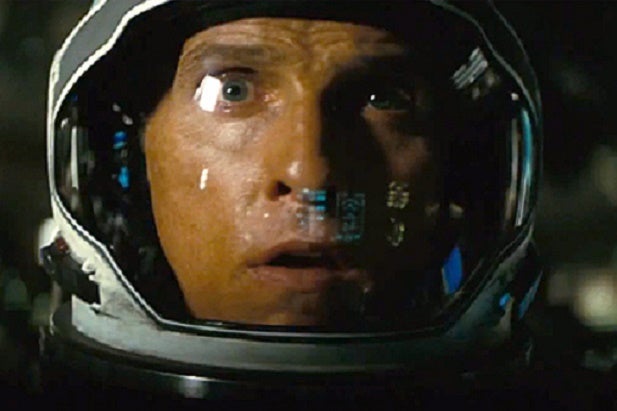 The space epic starring Matthew McConaughey powered to $17 million in its first day of wide release to claim the top spot for Paramount Pictures, with the Marvel-inspired family film debuting just behind it at $15.8 million. But “Big Hero 6” is expected to ride a wave of positive buzz — it received an “A” CinemaScore Friday to go with its 91 percent “fresh” Rotten Tomatoes rating — to the three-day triumph.

Also read: Why 'Big Hero 6' Has Edge Over 'Interstellar' at Box Office

If the kiddie crowd that the PG-rated “Big Hero” targets turns out in force on Saturday and Sunday, a first weekend in the $55 million range looks likely. That would probably be enough to hold off the PG-13-rated “Interstellar,” which is pacing for a $51 million first weekend.

Disney has “Big Hero 6” in a market-high 3,761 theaters, and around 3,100 are 3D. “Interstellar” wasn’t shot in 3D — Nolan is not a fan — and is in 3,561 theaters, 366 of which are IMAX. Whether the upcharges from 3D will benefit “Big Hero” more than the giant-screen premiums do “Interstellar” will have a lot to do with who claims weekend bragging rights. On Friday, IMAX provided $4.6 million, or 27 percent, of the “Interstellar” grosses.

The audience for “Interstellar was evenly split gender-wise at 52 percent male and skewed older, with 75 percent of the audience 25 or above. They gave the film a “B+” CinemaScore, the same that Nolan’ 2010 sci-fi tale “Inception” earned.

“Interstellar,” which co-stars Anne Hathaway, Jessica Chastain and Michael Caine, began its run on Wednesday and Thursday with special IMAX and 70 and 35 millimeter film showings in 250 theaters, which brought in a little more than $2 million.

If both movies finish above $50 million this weekend, it will be just the fourth time that’s happened. And in all the other matchups –“Monsters University” vs. “World War Z” in 2013, “Madagascar 3: Europe’s Most Wanted” in 2012 and “Wanted vs. WALL-E” in 2008– the animated movie has come out on top.

“Interstellar” and “Big Hero 6” dominated the multiplexes, with each movie taking in more than the rest of the top ten combined. The No. 1 movie for the past two weeks, Universal’s teen horror film “Ouija,” is on pace for third with $6 million over the three days.

For all the fireworks supplied by the top two films, the weekend is actually running a little behind the comparable frame last year, when “Thor: The Dark World” triumphed with $85 million.