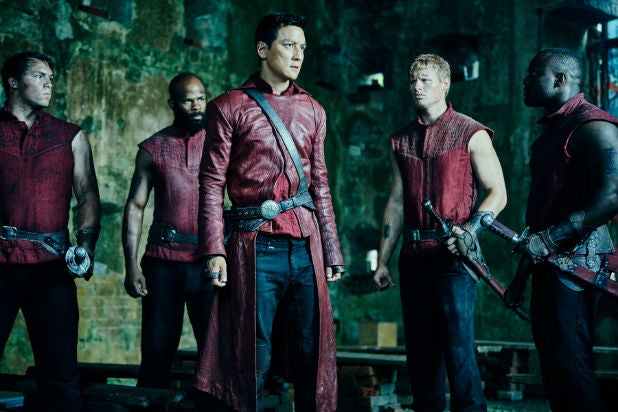 (Spoiler alert: Do not keep reading if you are not caught up on “Into the Badlands”)

Daniel Wu, the star of AMC’s new martial arts drama “Into the Badlands,” says that fans should get ready for something shocking in the season finale.

“A big bomb is going to drop that forces–because throughout the season we’ve seen a lot of storylines going in seemingly different directions,” Wu told TheWrap. “But the bomb that drops kind of forces all that stuff onto one track. The end of the episode leaves a big cliffhanger that will have you going, ‘Oh s–t, now what’s going to happen?'”

Sunny has made a deal with the River King (Lance E. Nichols) for passage out of the Badlands, but in order to leave, Sunny must deliver M.K. (Aramis Knight) — more specifically, his head.

But amid his plans to leave, he is caught in the middle of the war between Quinn (Marton Csokas) and The Widow (Emily Beecham). Yet despite Quinn’s erratic behavior, Wu believes that Sunny is ultimately still loyal.

“I think he’s really truly struggling,” he said. “But he also has a strange allegiance to Quinn because Quinn raised him. He has been Quinn’s right-hand man for a long time and there’s been this built up trust and this brotherhood between the two of them, so it’s not easy for Sunny to just leave.”

“It’s like the mafia in that way,” Wu continued. “You can never get out, and if you do get out you’re going to get chased down.”

Wu also said that interacting with the fans of the show on social media has been a true pleasure, with one hashtag in particular giving him a good laugh.

“It’s really interesting to me because I come from movies and the immediacy of people’s reactions, you’re seeing it happen while the episode is on,” he said. “But my favorite one is #ColorMeBadlands. That one’s pretty funny. I think a lot of those girls are like Nerds of Color and they like the diversity in the show and they like the Sunny/Veil relationship. But I like that hashtag because I grew up in the ’90s.”