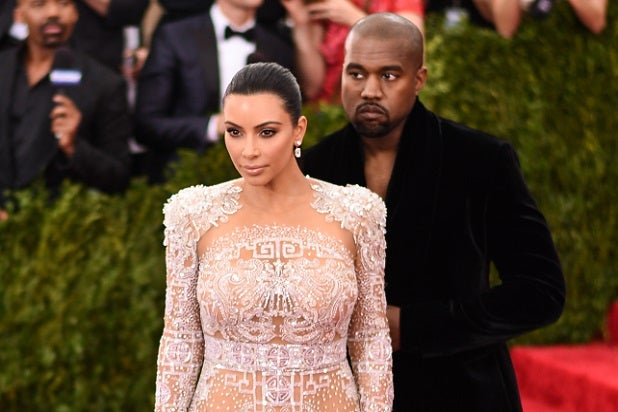 Kim Kardashian and Kanye West may, from all appearances, have a perfectly happy union. But from a brand perspective, it might be a marriage made in hell. At least for West, who wed the reality TV star in May of last year.

The oft-controversial hip-hop star has always drawn his share of public criticism. But Sunday night’s Billboard Music Awards, which saw the rapper roundly booed by the audience — as were his sisters-in-law Kylie and Kendall Jenner, who introduced his performance — seemed to bring the rancor to a new level, prompting the question: Is West’s association with the Kardashian clan damaging his credibility?

TheWrap spoke to Lyndsey Parker, managing editor of Yahoo Music, and Linda Ong, CEO of brand consulting firm TruthCo, to determine whether West’s ties with the Kardashian reality TV juggernaut are dragging down his brand.

Parker, who was in attendance at the Billboard Music Awards, told TheWrap that West was booed as much for a poor performance as anything else. She also emphasized that West is capable of attracting public scorn all on his own, as evidenced by his Taylor Swift encounter at the 2009 MTV Video Music Awards and his hours-late appearance at the Bonnaroo music festival in 2008.

She did, however, say that his ties to the “Keeping Up” crew could be compounding his image problem.

“I don’t think the Jenner/Kardashian association helps him necessarily; it’s another strike against him,” Parker offered.

Blowhard or not, West’s reputation as a groundbreaking artist and thoughtful songwriter has been solid for the past decade — a blessing that’s also half-curse when it comes to his union with Kardashian.

Fans who came to know West as a fairly intellectual musician “might have been disappointed to see that he basically just bagged this trophy wife reality star instead of maybe marrying someone that some people would see as an intellectual equal,” Parker noted. “He’s a really intelligent guy, as much of a jerk as he can be… and here he married someone that, at least to all people on the outside looking in, seems incredibly vapid, superficial and not very smart.”

Which might just make him a smart guy with a less intellectual wife, if not for his tendency to mix business — and art — with pleasure. Parker noted, in particular, West’s widely ridiculed “Bound 2” video, which was mocked as a cheesy travesty that focused far more on Kardashian’s physical attributes than West’s artistic vision.

“I mean, that was a low point,” Parker told TheWrap. “I almost thought, ‘Is he doing this for The Onion?’ … It was all about Kim and [putting] her assets on display, and it was just terrible. Is that good for his career?”

Further including Kardashian in his artistic endeavors, Parker cautioned, would be a mistake.

“I wouldn’t be surprised if is on the next album. He’s really involving her in a lot of stuff, and I feel like, yeah, maybe he should separate church and state a little more.”

Parker points to the marriage of oft-maligned actress Gwyneth Paltrow and musician Chris Martin as an example of how to maintain that separation, even if they ultimately divorced.

“Gwyneth wasn’t singing on a Coldplay album, Chris Martin wasn’t in her movies… they pretty much kept things separated, and at least for a while it worked,” Parker noted. “Everybody knew they were married, but her public hate never rubbed off on him.”

Nonetheless, barring a guest appearance by Kardashian on West’s new album, Parker doesn’t see Kanye’s fans abandoning him on the musical front because of their connection.

“I think the people who buy his records don’t concern themselves with the celebrity stuff as much,” Parker said. “He’s given people enough reasons to be disgusted with him and [say], ‘I’m not going to buy his albums anymore.”

Like Parker, Ong also noted a conflict between West’s musical accomplishments and his choice of soul mate. The world was introduced to West as an artist, Ong said, and “aligning himself, marrying and becoming part of Kardashian Inc. is sort of at odds with artistic culture, and really the principles of artists.”

West, as Parker noted, has been wise to keep his appearances on E!’s “Keeping Up With the Kardashians” to a minimum, showing up in just a handful of episodes over the past few years. But even without such direct crossover, the sheer scope of the Kardashians’ cultural imprint could in itself be diminishing West’s standing.

“In some ways, he’s become more of a Kardashian than Kim has become Mrs. West, and that sort of shows you the power of the Kardashian machine,” Ong pointed out.

So how does West avoid being completely swallowed up by the gravitational pull of the Kardashian machine? Ong suggested that he turn the public’s focus back to his considerable musical talents.

“His persona has really been more defined by the Kardashian narrative in recent months and years, and to really fight and try to establish himself as an artist again, he’s gotta make some noise.”

How much people enjoy that noise will largely determine whether West is perceived as a credible artist or an accessory for his reality TV star wife.

“A lot of it has to do with the quality of his music — if his music’s really good, he’s an artist,” Ong said. “If people are not so happy with his performance and his music, he’s a sellout.”