It looks like the long-standing feud between pop stars Katy Perry and Taylor Swift might have finally reached a peaceful end.

On Tuesday, Swift posted a video on her Instagram story of an olive branch — yes, a real one — from Perry accompanied by a note that reads: “Hey old friend, I’ve been doing some thinking on past miscommunications and the feelings between us, I really want to clear the air.”

“So I just got to my dressing room and found this actual olive branch,” Swift says in the video. “This means so much to me.” The “Reputation” singer added a caption to the video saying “Thank you Katy” with a double heart emoji. Swift is kicking off her “Reputation” tour in Arizona on Tuesday night. 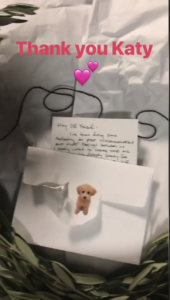 The two stars started out as friends but developed bad blood over some background dancers moving to Perry’s “Prism” tour from Swift’s “Red” tour back in 2013. Last June, Perry said she was ready to clear the air between them, and it looks like now she’s made good on the promise.

“I’m ready to let it go. Absolutely, 100 percent. I forgive her, and I’m sorry for anything I ever did, and I hope the same from her, and I think it’s actually ― I think it’s time,” Perry said on a podcast last summer.

“There are bigger fish to fry, and there are bigger problems in the world,” she continued. “I love her and I want the best for her, and I think she’s a fantastic songwriter, and like, I think that if we both, her and I, can be representatives of strong women that come together despite their differences, I think the whole world is going to go, like, ‘Yeah, we can do this.'”

However, there was speculation that Swift was trolling Perry in her “Look What You Made Me Do” music video, which dropped during the MTV Video Music Awards last August. At one part of the video, Swift is dressed to look an awful lot like the “Roar” singer, except she’s holding a Grammy… which Perry has never won (Swift has 10).

But hopefully the musicians can put all of the drama behind them. Perhaps they’ll even collaborate on a song together someday, as Perry suggested way back in 2009.

Katy Perry admitted to James Corden that the pop stars have beef. ”It’s time for her to finish it,“ she says