To follow the congratulatory navel gazing of Emmys season, the town looked outwards to charities last week. In one case, the philanthropic focus arrived by government mandate. 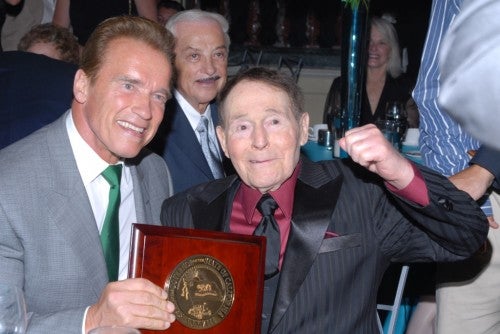 Gov. Arnold Schwarzenegger made a surprise appearance at the 95th birthday party for Jack LaLanne (of “The Juicer” Fame) at the Beverly Wilshire on Thursday. A nearly constant presence in LA despite his Sacramento job, the Gov dropped in to declare Sept. 24, 2009, “Jack LaLanne Day." The party itself doubled as a fundraiser for the ovarian cancer foundation, OCNA.

Also on Thursday, another women’s cancer group induced atypical displays of public emotion in Hollywood — public tears. Diane Von Furstenberg partnered with Susan G. Komen Foundation to jump the gun on October’s Breast Cancer Awareness month. Eliza Dushku hosted a “DVF” fashion show at Smashbox (West Hollywood, not Culver City) and brought out fashion fans Rick Fox, Denise Richards, and "Biggest Loser" host Alison Sweeney. Some VIP invitees got emotional during the mix of survivors walking the runway that interspersed with celeb models. Boldfacer or not, A-list gifts like a 10 -person dinner party at Mastro’s and tickets to the Grammys had guests opening up their wallets for the nation’s largest breast cancer charity. 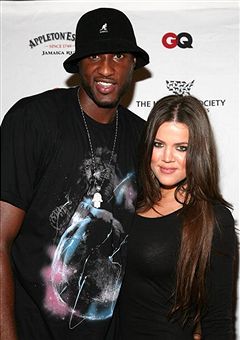 The ethical spirit was contagious — catching Ginner Goodwin and singer Mya — who traveled up to an 8,000-square-foot mansion in the hills for a Humane Society event on Tuesday. NSF Clothing partnered with GQ Magazine to welcome celebs (and some red carpet walking dogs too) for a benefit aimed at shutting down puppy mills.

E!’s reality fixture Khloe Kardashian found time to hit this carpet during her much discussed race to the altar this past weekend with Laker Lamar Odom (pictured pre-wedding at right; Getty Images). NSF donated 100 perent of the night’s proceeds to the Humane Society and won over "Twilight’s" Christian Serratos, who talked up a planned adoption when she comes home from shooting the hit’s two upcoming sequels in Vancouver. 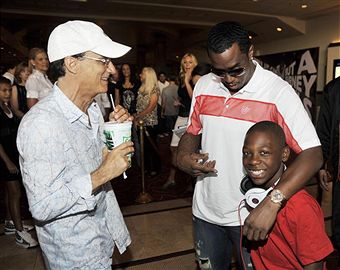 By the weekend, the parties retreated to commercial form. At Saturday’s screening of Lebron James’docu-film “More than Just a Game” at the Grove, Sean “P. Diddy” Combs hung with the film’s exec producer, Jimmy Iovine, and “Cloudy with a Chance of Meatballs” voice Bobb’e J. Thompson (pictured at left; Getty Images). At the Toronto fest, Lebron’s “legend in the making” doc — tracking the NBA star in as a 2003 high schooler – reportedly got a standing ovation. What happened after the credits here? The film’s famous fans wandered out of the theatre to go car oggle’ing, following Ali Landry and Cheryl Burke’s lead to the simultaneous “Matters on Design” event also at the Grove.

The art and design gathering doubled as a backdoor premiere party for Lincoln’s MKT concept car, while crowding up the Grove even more than the usual weekend crush.