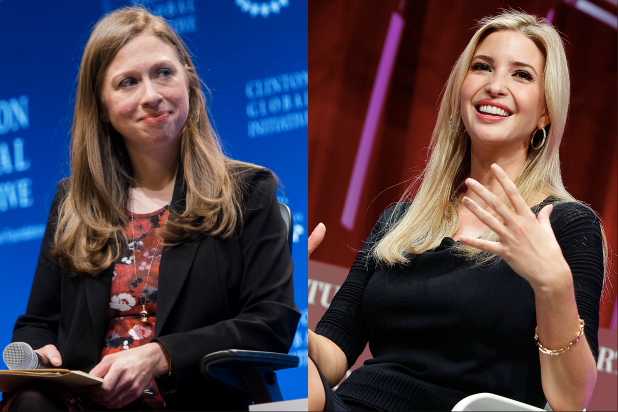 Ivanka Trump is considerably less popular than Chelsea Clinton, according to a poll released by Ipsos and the Daily Beast on Monday.

The poll found that Trump is viewed favorably by just 43 percent of Americans, while Clinton has a favorability rating of 50 percent. Trump also fares poorly when it comes to unfavorability, with a 46 percent rating, compared to 32 percent for Clinton.

Whereas Clinton was a teenager when her father was in the White House, Trump has taken on the role of senior political advisor, along with her husband Jared Kushner. In the early days of the Trump presidency, many on the left hoped that Trump — who previously donated to the Democrats — would serve as a check on some of her father’s harsher, right-leaning policies.

Instead, she has faced criticism for stepping aside as her father’s administration has left the Paris Climate agreement, banned transgender people from serving in the military, and created harsh policies against immigrants and refugees.

However, Trump has defended herself against claims that she is not doing enough to soften her father’s policies.

“Some people have created unrealistic expectations of what they expect from me. That my presence in and of itself would carry so much weight with my father that he would abandon his core values and the agenda that the American people voted for when they elected him. It’s not going to happen. To those critics, shy of turning my father into a liberal, I’d be a failure to them,” she told the Financial Times in September.

The two first daughters once shared a long-standing friendship, but Clinton told the Guardian in May that they have not spoken in “a long time.”

She added that she has no sympathy for Trump or Kushner receiving criticism for their roles in Trump’s White House.

“They’re adults who’ve made the decision to work in this administration,” she told the Guardian.

The Ipsos poll also found that Americans are unlikely to support celebrities or businesspersons for the presidency. Only 34 percent said that they would support Oprah Winfrey, who generated presidential buzz during a speech at the Golden Globes in January. However, several celebrities fared much better in general favorability ratings, with Bill Gates and Tom Hanks both pulling favorable ratings from 84 percent of Americans.

22 Worst Dads in Film and TV, From Homer Simpson to Darth Vader (Photos)