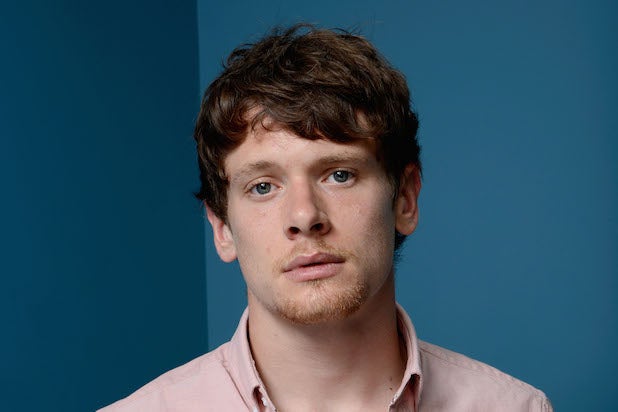 Though he’s been acting professionally for nearly a decade — you might know him from the British edition of “Skins” and the drama “This is England” — Jack O’Connell is only now making his first visit to New York City. And while he’s here for work — his intense prison drama, “Starred Up,” is playing at the Tribeca Film Festival — he’s doing some sightseeing, too.

“I got a chance to walk yesterday, along the waterfront, across the water from New Jersey. Took some photos. I got as far as Little Italy,” he told TheWrap on Monday, before adding two other sightseeing ambitions: “Where John Lennon died,” which is the Dakota apartment building on the Upper West Side, “and that shop that was in ‘Home Alone,’ that toy shop,” meaning FAO Schwartz.

The latter was sort of a funny itinerary item to hear coming from O’Connell, who wears his tough and smart working class roots on his sleeve and in his voice. In fact, at one point there was a chance he wasn’t even going to be able to come visit the United States, because of problems with the law.

“I had my run-ins,” O’Connell admitted, alluding to childhood brushes with the law while growing up in Derby, England. “I’m not clean as a whistle, hence my sort of overall relief that I finally obtained an American working visa.”

While he didn’t get specific about those run-ins, O’Connell did admit that it took a lot of work to overcome them.

“In my country as is the case over here, there is such thing as a second chance,” he said. “I really, really had to dig deep to get a second chance. I had to spend a lot of time doing drug tests and alcohol tests and even after doing that, I was denied once. It’s just been a case of letting my actions do the talking. I know I’m not a liability to myself, I’m not violent either. My life isn’t a struggle anymore.”

“When my life was a struggle, I was perhaps in an environment where, I’d always argue that I was just a product of my environment, and I’m not in that environment anymore,” O’Connell, who went to a rough local Catholic academy in Derby, said. “I elevated myself, and now my intention is to help people like myself do the same in whatever field it is. And to not necessarily be supported in the way that you’d expect was very frustrating. But like I said, I think the actions speak for themselves now. Overall, I’m grateful, everything’s worked itself out.”

The actor was saved in part by being accepted into a television workshop in Nottingham, which would generally require expensive travel.

“The only way I could travel to and from Nottingham was my dad worked on the railway, which enabled me free train fare,” he explained. “I wouldn’t have been able to afford that if it wasn’t for my dad’s job.”

All these experiences helped him channel the right emotions for “Starred Up,” in which O’Connell plays a young inmate named Eric who has just been transferred to a prison in which his absentee father (played by Ben Mendelhson) resides. He is angry and bitter about his circumstances, and rather volatile, but begins to break through emotionally with the help of a prison therapist (when not brawling with older inmates). The movie was written by Jonathan Asser, a man who spent many years working with vulnerable inmates.

The film is bleak in its outlook on the justice system, much more so than human nature; Asser and director David MacKenzie work to convey the notion that in so many cases, imprisonment and crime comes from nurture (or lack thereof) rather than nature.

“He offered us the opportunity to meet a couple of the lads that he worked with,” O’Connell said, referring to some of Asser’s former inmates (some of whom got small roles in the film). “Seeing the way they operated with him, with this level of immense expect, real gratitude you see in them approaching him, that helped validate Jonathan’s point of view a lot.”

Of the inmates he met and worked with, O’Connell said, “The really frightening people I met were actually quite pleasant to talk to. Sometimes they’re not even angry when they’re being violent. It’s almost professional.”

Gloom and sadness hang thick over the movie, which is filled with incredibly charged performances, brooding and spring-loaded for sudden explosion. It helped that they shot in a real prison, an out-of-commission place in Northern Ireland called Crumlin Road Gaol, which O’Connell visited a week before anyone else.

“It certainly helped with the atmosphere, the slamming doors, the walls are very cold and very hard,” O’Connell said. “It was a hardened atmosphere. A lot of the times when you’re doing stunts and stuff, they cheat things and it’s padded. I much prefer to stay with the hard, brutal nature of it.”

He’s sure to say over and over, though, that they wanted to make every character three dimensional, not just the inmates; giving guards, who can seem corrupt, at least a fair representation was important to everyone on the team.

O’Connell first opened eyes with his role in Skins,” and was seen earlier this year in the “300” sequel. “Starred Up” should also provide him some positive career momentum thanks to the rave reviews it has received (released last year in the UK, it was nominated for a slew British Independent Film Awards). Still, he’s largely a fresh face to American audiences (and people in New York), but that should change very soon, thanks to his leading role in Angelina Jolie‘s upcoming period drama, “Unbroken.”

“I’ve spoken a lot about her but still don’t feel like I’ve been able to encapsulate fully the inspiration that she offered me,” he gushed when asked about Jolie. “Even in directing, seeing her as she contends with her public persona and the woman herself, as well. Above all of that as well, I’ve seen her engaged with everyone on set, and that to me is important. And also she’s remarkably talented. I watched ‘Girl, Interrupted’ recently, since working with her, and I’d like to see her again just to shake her hand for that. I think she achieved something infinitely special.”

While he didn’t have to shoot an entire film in a prison, O’Connell went through perhaps an even more difficult time for “Unbroken,” as he had to simulate the insane extremes that marked the life of Louis Zamperini, an Olympic athlete who spent years in a Japanese prison camp during World War II.

“I had to starve myself and she was really mindful of all that for everyone,” O’Connell said, noting that he then had to whip himself into the sort of shape you’d expect out of an Olympic track and field star in just two weeks.

As for his next role, O’Connell was excited but cautious about a film called “Tulip Fever,” which is set in 17th century Amsterdam. He needs to work on his elocution, he said, as well as learn all about the time period. He’s mostly used to playing working class roles, which works well with the fact that he’s still so connected to his hometown. One of them is an independent youth cinema, where he hopes to connect kids with opportunities to act and make movies — after all, not everyone has a dad who can put them on a train to acting lessons that end up turning their lives around.

“I was very fortunate, but that shouldn’t be pivotal for people,” O’Connell said. “It’s an organic art form, it shouldn’t be determined by wealth. And more and more now, people want to see roles outside the traditional dramatic blueprint, working class stories, prison dramas, crime dramas.”