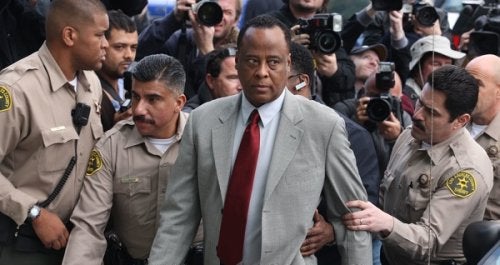 If found guilty, he could be sentenced to two to four years.

Judge Keith L. Schwartz also banned Murray from handling, prescribing or administering propofol or any other heavy sedative medication in any of the regions where he has a medical license, including California and Texas. The judge, however, did allow him to oversee a colleague administering the drug.

It was propofol that is primarily blamed for Jackson’s death.

Bail was set at $75,000. In addition, Murray’s passport will be handed over to the Department of Justice, though he will have no travel restrictions within the U.S.

The government had asked to put bail at $300,000 — well above the usual $25,000 in similar cases — citing the fact that Murray’s primary residence is Las Vegas, he was born in Grenada and travels frequently. 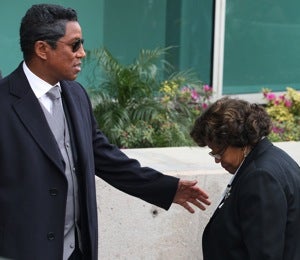 A preliminary scheduling hearing has been set for April 5, but it wlll be moved to downtown L.A. for security reasons.

Arriving in a white Buick Enclave and looking extremely tired, Murray surrendered at 1 p.m. Monday at the Superior courthouse on La Cienega in L.A., where prosecutors had filed charges earlier in the morning.

In a glimpse of the inevitable circus to come, media, fans and members of Jackson’s family swarmed the court building before his arrival.

Joe Jackson told reporters he was seeking "justice for Michael," adding that "manslaughter is not good." Jermaine told CNN cameras that the charge was "not enough." 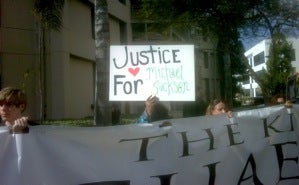 During the trial, the Jackson family sat in the second row, behind the district attorney. Though he arrived separately and with his own entourage, Joe sat next to Katherine during the proceedings. The family members did not speak to each other.

After the hearing, the family exited into the hallway of the courthouse where the were mobbed by fans and deputies.

Speaking briefly to the media outside, a subdued Katherine Jackson called Murray "a monster."

At a press conference following the hearing, while Murray was being processed by the court, his attorney Ed Chernoff said the doctor would "be back in Vegas within the week with his family."

Asked if he thought it would difficult finding an impartial jury, he said: "It’s gonna be tough."

At 3:30 p.m., roughly 90 minutes after his arraignment, it was announced that Murray had left the courthouse.

Speculation had mounted since Jackson’s death last June that Murray would be indicted for manslaughter. It’s a risky course for prosecutors to take against a physician, given how difficult it is to win a conviction on the charge.

California’s penal code defines manslaughter as “the unlawful killing of a human being without malice” and prescribes a maximum sentence of four years in state prison for involuntary manslaughter – that is, for a death resulting from “the commission of a lawful act which might produce death, in an unlawful manner, or without due caution and circumspection.”

Los Angeles attorney Ronald Richards says that typically a doctor accused of causing a patient death might face a charge of criminal negligence.

“It’s highly unusual to charge a doctor with involuntary manslaughter,” says Richards, a veteran defense lawyer with experience in drug cases. “You can’t convict a doctor for his medical judgement. Pain-management is a complex area to litigate and it’ll be difficult to second guess [Murray’s] medical opinion."

Murray, whose practice is in Houston, arrived in Los Angeles last weekend to await word from the District Attorney’s office on his fate. He had mostly kept a low profile, with the exception of a personal visit over the weekend to Jackson’s tomb at Forest Lawn in Glendale, which was caught in photos published by TMZ.

“He’s going to be the poster child for doctors who play fast and loose and prescribe optiates for their celebrity patients," Richards says. "Especially out-of-state doctors.”

Such a high-profile trial would probably not take place this year.

"Any DA is going to try to avenge the death of the King of Pop by going after his doctor," says Richards, who nevertheless says the trial would involve risk for prosecutors.

"They can get their asses kicked by a legion of medical professionals who’ll testify that Dr. Murray was acting within his medical expertise," Richards says. "It would be a cauldron."