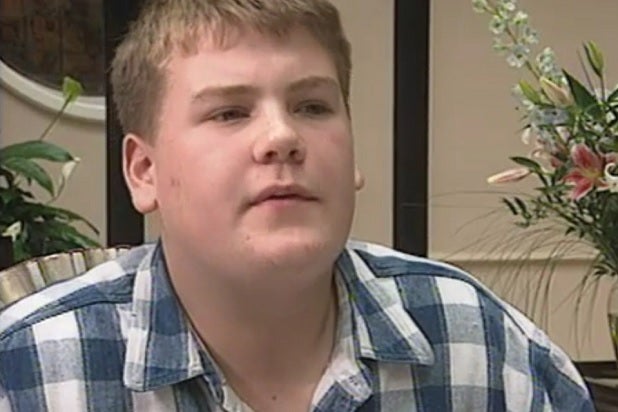 James Corden wasn’t always the polished showman you see on “The Late Late Show” every night.

In honor of Corden’s 38th birthday on Monday, the BBC released a video (below) of Corden from 1995 when he was the Young Good Morning Showbiz Reporter for the British show “Good Morning With Anne and Nick.”

“I’ll be bringing you all the top gossip, plus an exclusive interview with Meat Loaf,” a cherubic Corden says in the video.

Also Read: Emmy Contender James Corden on Overzealous Fans Forcing Him Into Car: 'Am I Being Kidnapped?'

We then cut to Corden arriving at Meat Loaf‘s hotel, where the two share an English breakfast and discuss the rock ‘n’ roller’s career in music and acting.

Corden asks how it feels to be on tour, and Meat Loaf responds by beating his head against the table. But he goes on to say that he truly enjoys his work and gets to meet lots of interesting people as he travels the world with his music.

Finally, Corden asks if Meat Loaf has any advice for him, because Corden himself is the member of a band and one day hopes to be as famous as the “Bat Out of Hell” singer.

“The one thing you’ve gotta do, is that you need to always do the best you can do, no matter what the given situation, no matter what comes up against you,” Meat Loaf says.

“You do the best you can do and you never give up. Never quit.”

#OTD 1978 James Corden was born.
Ready for some #archivegold from 1995?!@JKCorden@latelateshow@realmeatloafhttps://t.co/bwXYhiqEuQ