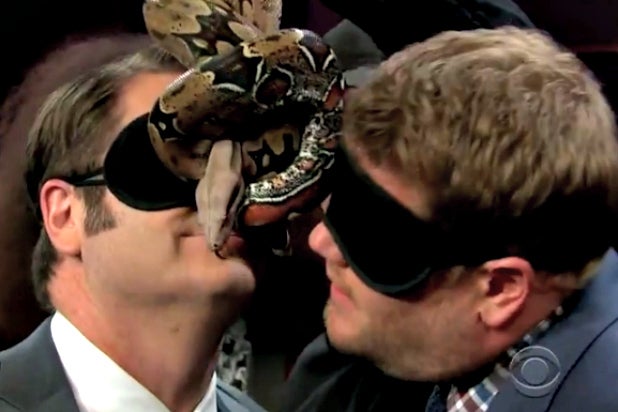 Celebrities, fair warning: Do NOT sign up to play “Nuzzle Waaa?” with James Corden.

The “Late Late Show” game, which pits two teams of stars against each other to nuzzle and guess random foreign objects while blindfolded, got a little gross on Monday. While Ellie Kemper ended up with red gummy bear stains all over her face after Round 2, the ickiest offering came next.

The CBS host and “Parks and Recreation” star Nick Offerman unknowingly nuzzled a gigantic snake as the “Unbreakable Kimmy Schmidt” star — Corden’s teammate — freaked out in the background. Offerman’s partner, “Silicon Valley’s” Thomas Middleditch, seemed to enjoy the view a little more — probably because the worst he got to that point was the other end of the yummy chewy grizzly.

Later, it officially got weird, when all four actors nuzzled up on a sumo wrestler, who seemed to really enjoy every second of the experience. Somehow, Corden knew exactly what he was rubbing his face up against.