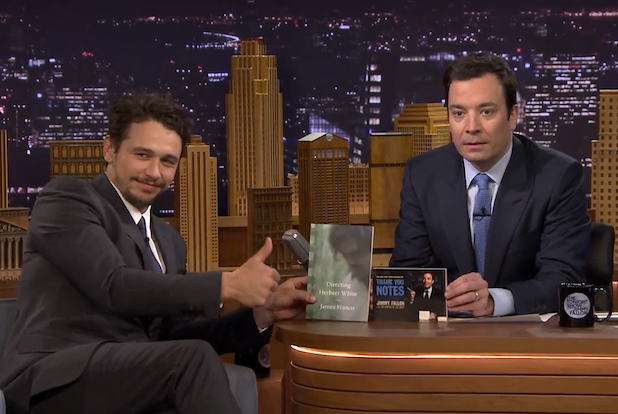 James Franco visited Jimmy Fallon Friday on “The Tonight Show” to talk about his Broadway debut in “Of Mice and Men” as well of his first book of poems, prompting Franco and Fallon to compare their publishing records.

“I have one book,” Fallon said, whipping out a copy of his humorous “Thank You Notes.” You can see a photo of the two published authors above. Franco is earnest about his own efforts, aware that some may roll their eyes at him.

“I know how an actor writing poetry sounds,” Franco told the crowd. “I have a master’s degree in poetry.” Franco earned the degree from Warren Wilson College in North Carolina. The book, whose title stems from the work of award-wining poet Frank Bidart, is the product of four years of work there.

Franco, at times the object of ridicule given his myriad artistic endeavors, put to rest any doubts. He has put in the work.

“It’s not easy getting a graduate degree,” Franco said.