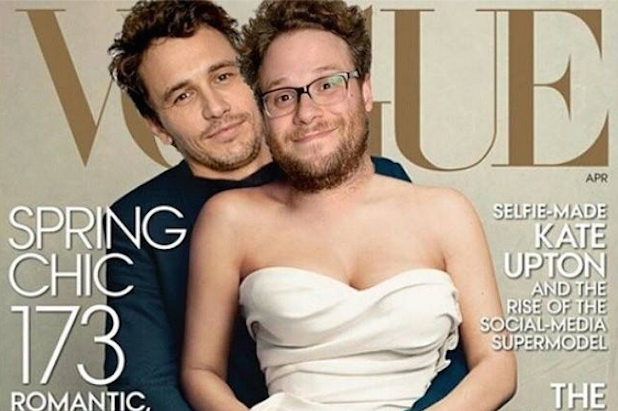 Back in November, James Franco and Seth Rogen jumped aboard a motorcycle and rode against a green screen to create a shot-for-shot parody of Kanye West’s jaw-dropping music video for “Bound 2,” which featured a naked Kim Kardashian riding the rapper while he rode the bike.

Now, the buddies who met 15 years ago on “Freaks and Geeks” have used a bit of Photoshop magic to mock another big Kimye promo; this time, it was a matter of copy and pasting heads to create a goofy replica of Kim and Kanye’s new Vogue cover.

Within one hour of Franco posting it to his Facebook page — with a caption that said, “Seth! Love you, dog!” — it received nearly 150,000 likes and over 5,000 comments. Franco spent Friday evening acting on Broadway, in “Of Mice and Men,” so he had to have gone and posted the photo shortly after coming on stage.

The guys weren’t the only ones to mock the Vogue cover; among others, Sarah Michelle Gellar tweeted that she was going to cancel her Vogue subscription, which really must have driven a stake into the heart of the #WorldsMostFamousCouple, as the magazine called Kim and Kanye.