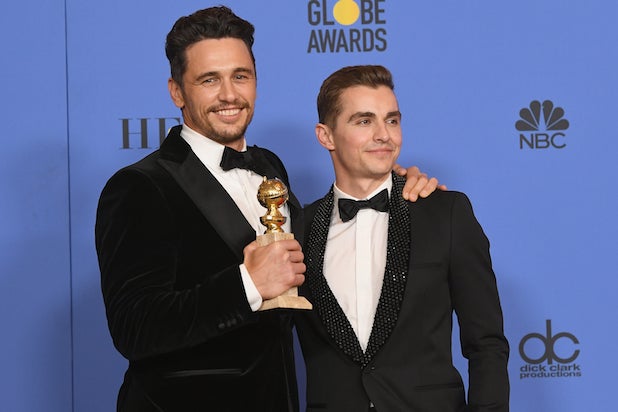 James Franco was clearly psyched to win a Golden Globe award on Sunday. But the honor really ticked off some people Twitter, along with “Breakfast Club” star Ally Sheedy.

Franco sported one of the evening’s popular Time’s Up pins — supporting the awards show’s anti-sexual-misconduct movement — while accepting his Globe for Best Actor in a Motion Picture Musical or Comedy for his performance in “The Disaster Artist.” But many viewers, were quick to recall the story of Franco’s attempts to pick up a 17-year-old girl via Instagram in 2014 — a move they found to be in stark contrast to the message on the actor’s lapel.

Franco contacted the underage girl through Instagram after meeting her outside his Broadway show Of Mice and Men in 2014. It was widely reported that Franco offered to rent a room to hang out with the “almost” 18-year-old, who went on to publish their correspondence online.

The actor later went on “Live With Kelly and Michael,” saying he was “embarrassed” after admitting to contacting her, saying that “social media is tricky.” “I used bad judgment,” Franco said.

Sheedy brought up a personal story instead, writing, “James Franco just won. Please never ask me why I left the film/TV business,” the actress wrote in a series of tweets that have since been deleted. Franco directed Sheedy in an Off Broadway production of “The Long Shrift.”

Representatives for Franco and Sheedy did not immediately respond to TheWrap’s request for comment.

Also Read: Hollywood Calls on Oprah to Run for President in 2020

See tweets in response to Franco’s win below.

Cute #TIMESUP pin James Franco. Remember the time you pushed my head down in a car towards your exposed penis & that other time you told my friend to come to your hotel when she was 17? After you had already been caught doing that to a different 17 year old?