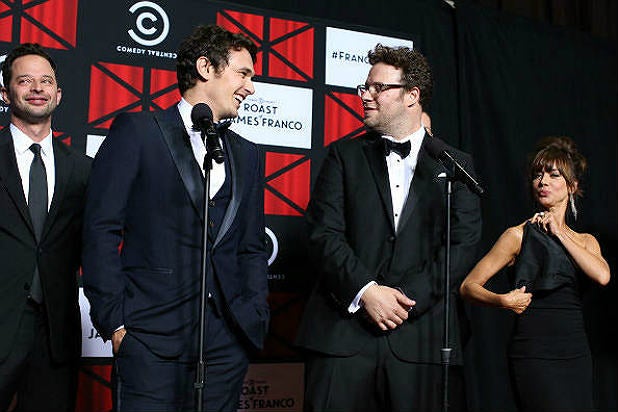 James Franco is the guest of dishonor in Comedy Central’s upcoming roast of the “Pineapple Express” actor, but that doesn’t mean that the other occupants of the dais don’t catch their share of barbs, too.

“I really love all these people up here. You know, like Bill Hader — good friend of mine. He was brilliant on ‘SNL,’ he was brilliant,” Hill gibes. “And when he left the show this year every single person was like, ‘What are you doing? You’re never, ever gonna work again, like, ever!’ And what does my man Bill do? Boom — he goes ahead and books himself a T-Mobile commercial. Who’s laughing now, Lorne Michaels?”

Ross, meanwhile, poked fun at one of the lesser entries in Rogen’s film canon.

“I saw your mall-cop movie. What was it called?” Ross cracked, referring to Rogen’s 2008 film “Observe and Report.” “It made me realize how funny Kevin James is.”