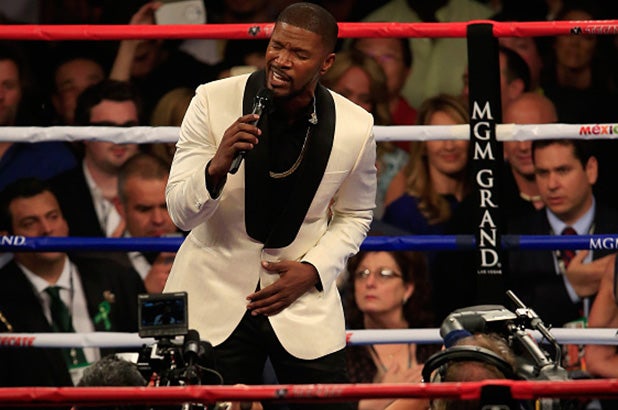 Jamie Foxx turned in a headline-making performance of the national anthem before the Floyd Mayweather vs. Manny Pacquiao fight.

And he was KO’d on social media in the process.

Foxx belted out what can best be described as a soulful rendition of “The Star-Spangled Banner” on Saturday night, complete with vocal gymnastics and a “hallelujah” at the end.

Unfortunately, the “Ray” Oscar winner was ripped by boxing fans for putting more twists and turns into his rendition than the actual fight.

Another fan suggested Foxx would have been yanked off the stage if he had performed the song at the Apollo .

Other Twitter users were equally unimpressed. Below is a sampling of reaction, along with the video of Foxx’s performance. Let us know in the comments section what you think.

What song is Jamie Foxx singing?

Both Boxers should take the first minute of the 1st round and knock out Jamie Foxx for butchering the Anthem!!

Jamie Foxx making me feel good about my shower singing

Pretty sure Roseanne is smiling after that Jamie Foxx performance.

Remember when Jamie Foxx sang the national anthem well? Nope, me neither.

Hey how come no one arrests Jamie Foxx for his anthem?

I thought Jamie Foxx was going to start singing "my mind's telling me noooooo, but my bodyyyyy" #PacquiaoMayweather

Jamie Foxx is REALLY lucky that he wasn't performing at the Apollo.

@iamjamiefoxx please get your pitch, tone and KEY together. You have been singing lately OFF KEY!! https://t.co/xnXAfjHBAV

The real fight was between Jamie Foxx and the national anthem pic.twitter.com/WlcyD9nkD3

Watch the video of Foxx’s performance.