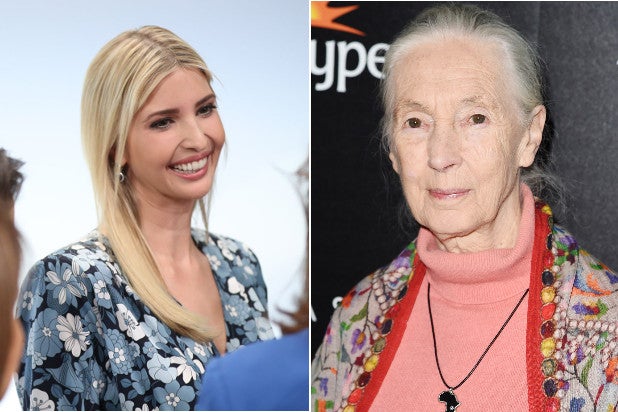 Conservationist Dame Jane Goodall was quoted in Ivanka Trump’s new book, but she isn’t happy about it.

In Ivanka’s memoir “Women Who Work: Rewriting the Rules for Success” published Tuesday, the first daughter describes what it’s like to be a working mother, and uses a quote by Goodall as a source of inspiration.

“What you do makes a difference,” the quote written by Goodall reads, “and you have to decide what kind of difference you want to make.”

While these may be wise words to live by — the world’s foremost expert on chimpanzees and animal welfare expert did not know her quote was going to be included in Ivanka’s memoir, and has some personal advice for her.

“I sincerely hope she will take the full import of my words to heart. She is in a position to do much good or terrible harm,” Goodall said in a statement to CNNMoney.

“Legislation that was passed by previous governments to protect wildlife such as the Endangered Species Act, create national monuments and other clean air and water legislation have all been jeopardized by this administration,” Goodall continued, referring to President Trump’s legislation that many believe is damaging to wildlife consecration.

“I hope that Ms. Trump will stand with us to value and cherish our natural world and protect this planet for future generations.”

Goodall, 83, who has dedicated her life environmental conservation and animal activism, founded the Jane Goodall Institute in 1977 to create programs that promote environmentalism. She also holds the honorary title of messenger of peace for the United Nations and has served on the board of the Nonhuman Rights Project since its founding in 1996.

In a follow-up statement to CNN, Ivanka Trump’s representatives reiterated that the book is not political.

“Ivanka has always believed that no one person or party has a monopoly on good ideas,” the statement said. “When she was writing this book, she included quotes from many different thought leaders who’ve inspired Ivanka and helped inform her viewpoints over the years.”

Trump’s book hasn’t been received well, especially after an excerpt from it was published on Fortune. It describes the hardships of being too busy to get massages or having the time to meditate, which is not considered relatable to many working mothers.