In a movie-verse full of Katnisses, Black Widows and whatever that “Divergent” girl is supposed to be, pioneer homesteader Jane Hammond (Natalie Portman) doesn’t quite stand out as a superheroine. But when her husband Bill (Noah Emmerich) arrives home with five bullets in him, Jane’s resolve not to fall victim to his vengeful shooter overtakes her in a tale with more feeling than sense.

That’s not exactly a dismissal. All three of this Western’s central characters — Jane, her former betrothed Dan Frost (Joel Edgerton), and the villainous outlaw Colin Bishop (an unrecognizable Ewan McGregor, with a black broom resting above his upper lip) — are drawn to a fight they know better than to pursue. But hey, no one ever accused people of being reasonable.

Jane’s probably aware that the smarter thing to do would be to grab her young daughter and hightail it out of their New Mexican barely-a-town. But her sense of honor forbids it, which is how she ends up enlisting her embittered but still smitten ex-fiancé in a struggle for her life as the Bishop Boys come to finish Bill off and to take care of some unfinished business with Jane.

Directed by Gavin O’Connor (“Warrior,” “Pride and Glory”), “Jane Got a Gun” takes long pauses in the action to chronicle through flashbacks how this love triangle comes to defend a single home. The film’s greatest surprise is that these unabashedly emotional flashbacks work. Before Jane’s life is threatened by Bishop, it’s thrashed about by the chaos of the Civil War and the terrifying lawlessness of the frontier.

Also Read: Director Gavin O'Connor in Negotiations to Replace Ben Affleck on Thriller 'Tell No One'

As the mystery behind the demise of Jane and Dan’s engagement slips away, what remains are two young people who were too hopeful and too in love to imagine the tremendous hurt the world could visit upon them. That they now know better is, of course, absolutely no help to them at all. 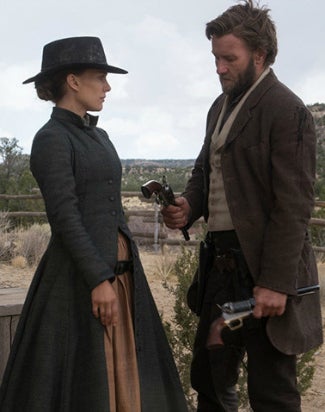 It turns out that the Hammonds’ history with the Bishops snakes back far and with a whole lot of venom. Sexual assault looms large in the plot, and the fact that Jane seems to be one of only two women in town who isn’t a prostitute is no coincidence.

But thankfully, this isn’t another historically revisionist, grim-dark bleak-a-thon like, say, “The Revenant” and “The Hateful Eight.” The trap that Jane and Dan painstakingly set for their would-be killers approaches humor in its cathartic sadism, and when the two finally reconcile over a gravely ill Bill, there’s a groundswell of empathetic relief.

Jane isn’t a natural ass-kicker — she’s no sharpshooter like Dan, who ends up rescuing her multiple times. But she’s flinty enough to drop some gunpowder into her husband’s wounds and light it on fire to cauterize his wounds, or to blow off a piece of an attacker’s cheek when he grinningly offers to “share” her with another man. Lilting beautifully in Jane’s native Missouri accent, Portman is in her default ice-princess mode here. She doesn’t quite pull off Jane’s maternal grit, but she (and the squinty, mumbly Edgerton) certainly nail the film’s dusty chic. (Sand in your eye never looked better.)

Sharper characterization and a greater sense of place and time would have rendered the obligatory scenes in Edgerton, Anthony Tambakis, and Brian Duffield’s Black List script less generic. In the only outright disappointing moment, Jane and Dan strike too modern a tone, with her surprising him with a romantic hot-air-balloon ride.

But there’s little trace of the film’s storied troubles, when director Lynne Ramsey abruptly departed the project and several actors followed suit. Jane got a gun — and her very own tale to tell.