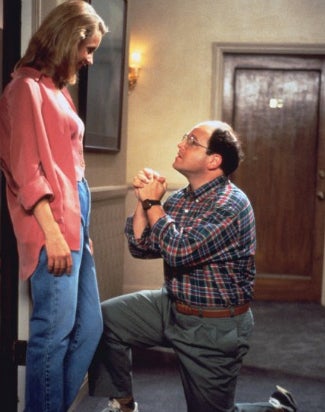 Jason Alexander, the man behind perhaps the greatest sitcom character of all time — “Seinfeld’s” George Costanza — revealed on Wednesday why his on-screen fiancée Susan Ross had to be killed off in 1997 after 28 episodes.

“The actress is this wonderful girl, Heidi Swedberg, I love her,” Alexander started his story on Wednesday morning to an eager Howard Stern. “I couldn’t figure out how to play off of her.”

“Her instincts for doing a scene — where the comedy was — and mine, were always misfiring,” he continued. “She would do something and I would go, ‘OK, I see what she’s going to do, I’m going to adjust to her’ — and I’d adjust, and then it would change.”

Apparently their chemistry was so bad, that when creator Larry David told Alexander his character would get engaged to hers on an upcoming season, the actor’s response was: “Great, who’s playing George?”

David’s reasoning for keeping the actress and her character around anyway was simple: Whatever it was exactly that Swedberg brought to Susan, the writers could get away with doing the most horrible things to her, and the audience lapped it up.

Alexander continued on, telling Stern and sidekick Robin Quivers that no one ever believed his complaints about how tough Swedberg was to work with, until an episode where Jerry Seinfeld‘s titular character and Julia Louis-Dreyfus‘ Elaine swapped a bunch of lines with Susan.

Also Read: Jerry Seinfeld Declares 'TV Is Over and There's Nothing Special About It'

Before that taping, it was unclear whether George would actually marry Susan, or what would come of the story arc. After the shoot, it didn’t take very long to rule actual nuptials out.

At a diner following filming– a ritual for the main cast and David — both Seinfeld and Louis-Dreyfus finally admitted what Alexander had been saying all along: “You know what, it’s f–king impossible.”

“And Julia went, ‘Don’t you want to just kill her?'” Alexander recalled. “And Larry went, ‘Ka-bang!'”

So they ordered some cheap, toxic wedding envelopes, and the rest is TV history.

Listen to interview portion below: