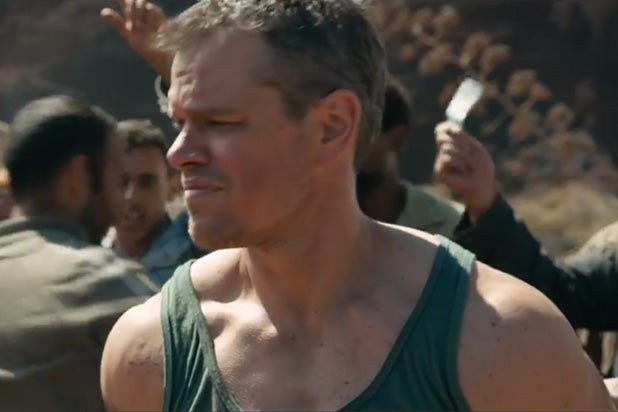 Both “Jason Bourne” and “Bad Moms” are on track to get more than they bargained as they open wide this weekend.

That puts predictions on the spy thriller above $60 million — when the studio indicated earlier in the week it would have been happy with north of $40 million.

Earning $9.6 million on Friday, the buzzy title is now on track to beat initial estimates by roughly $10 million, to end the weekend somewhere closer to $30 million.

Meanwhile, Lionsgate’s thriller “Nerve,” about a teenager (Emma Roberts) who becomes entangled in an online game of truth or dare, made $3.2 million from 2,583 locations on Friday.

The movie represents some counter-programmming that should help its opening end the weekend with nearly $10 million. Open since Wednesday, the five-day gross should come in close to $16 million, which is slightly higher than initial estimates.

Reported to have been produced for under $20 million, the PG-13 film also stars Dave Franco and has an A- Cinemascore, indicating high fan anticipation.

With a 56 percent Rotten Tomatoes score, “Nerve” is the only movie in theaters geared toward the early teen set, specifically teen girls. And it probably doesn’t hurt that it’s about a mobile app that shares similarities with “Pokemon Go.”

Matt Damon‘s comeback in the Bourne series is sizing up to be a lucrative move for Universal as the movie’s expected $60 million-plus take would make the film the second highest-grossing opening weekend of all five Bourne movies, behind 2007’s “Bourne Ultimatum,” which debuted to $69.3 million and went on to gross $227.5 million domestically and $215.4 million abroad.

Also Read: Does 'Jason Bourne' Have a Post-Credits Scene?

With a reported budget of $120 million and an A- Cinemascore (indicating high fan anticipation), the spy thriller is positioned to do some solid business in spite of its current Rotten Tomatoes score of 56 percent.

Another indicator of its impending, not-so-covert glory: “Jason Bourne” led online ticket sales at Fandango, outpacing 2015’s “Mission: Impossible – Rogue Nation” when that buzzy title was at the same point in its sales cycle.

Director Paul Greengrass‘ new Bourne movie was also moving the needle in social chatter earlier this week, up by roughly 8,000 from last week to 28,429 new conversations. So far the movie, which co-stars Tommy Lee Jones, Alicia Vikander, Vincent Cassel, Julia Stiles and Riz Ahmed, has amassed a total amount of 244,938 conversations, according to comScore’s PreAct results.

Also Read: 'Jason Bourne' Reviews: Does Sequel Thrill or Is It Franchise Overkill?

The franchise as a whole has grossed more than $1 billion worldwide.

STX comedy “Bad Moms” is on a pretty great trajectory, given its $20 million production budget.

It has a solid A Cinemascore, though a somewhat mixed 64 percent on Rotten Tomatoes.

Fandango reported earlier this week that “Bad Moms” ticket sales are outpacing previous female-led comedies “Trainwreck” and “Spy” — another good sign for the title. The movie revolves around a group of moms who decide to stop striving to be perfect and go on a wild on a self-indulgent binge to reclaim their freedom.

Plus, writer-directors Jon Lucas and Scott Moore‘s movie inspired 35,648 new conversations on social media in the past week, according to comScore. (That’s more than “Bourne”!)

Despite the “chick flick” label, recent tracking showed an increased interest among males aged 17 to 34, representing a substantial climb to 43 percent. That’s up from 30 percent at the end of last week, and continued on an upward trajectory. Tracking also shows strong and growing interest among women.