If you thought you saw Jason Momoa sporting casual gym gear, well…you’re right! Momoa was shown wearing a tank top at the Golden Globes on Sunday night. As Brian Cox headed to the podium to receive his Golden Globe for winning Best Actor in “Succession,” he passed by the “Aquaman” star who was wearing a tank-top inside the ballroom. 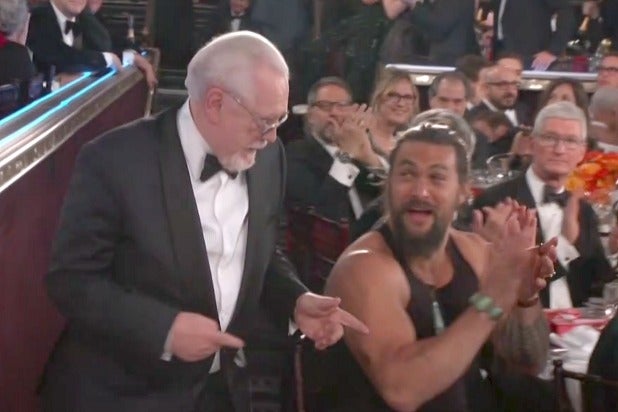 On the red carpet, however, Momoa was wearing a teal velvet jacket over the tank-top. Later when he went on stage to present the award for Best Performance by an Actress in a Supporting Role in a Series, Limited Series or Motion Picture Made for Television with his step-daughter Zoe Kravitz, Momoa put his jacket back on.

As usual, folks on Twitter had some opinions about the “Aquaman” star’s casual look:

This is the only appropriate response to seeing Jason Momoa’s muscles #GoldenGlobes pic.twitter.com/jY9nbvDnY8

Love that Jason Momoa is in a muscle shirt! He don’t give af pic.twitter.com/m8I88F5LyR

Aquaman Jason Momoa give no fucks. The sleeves are off!!! #goldenglobes2020 pic.twitter.com/kzUkNKmUsc