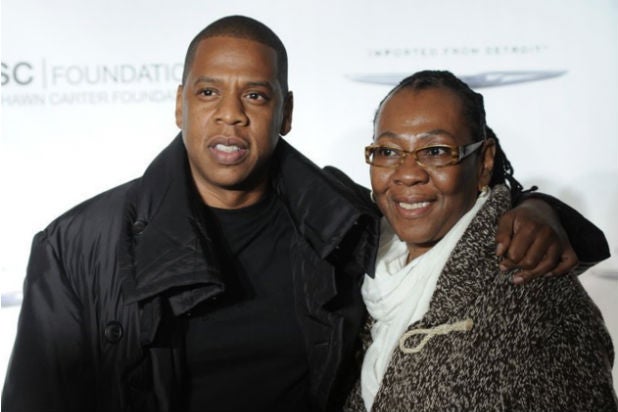 Jay-Z’s mother Gloria is being praised by fans and human rights groups alike, for boldly coming out as a lesbian on her mogul son’s new album “4:44.”

Both , who raised her son and his three siblings as a single mom in Brooklyn’s Bedford-Stuyvesant neighborhood, and Jay-Z speak of her sexuality on a new track called “Smile.”

“Mama had four kids, but she’s a lesbian / Had to pretend so long that she’s a thespian,” Jay-Z says.

“Had to hide in the closet, so she medicate / Society shame and the pain was too much to take / Cried tears of joy when you fell in love / Don’t matter to me if it’s a him or her,’ he continues.

In an emotional guest appearance reading an original poem, Gloria chimes in as well.

“Living in the shadow / Can you imagine what kind of life it is to live? / In the shadows people see you as happy and free / Because that’s what you want them to see,” says the original Mrs. Carter.

“Living in the shadow feels like the safe place to be / No harm for them, no harm for me / But life is short, and it’s time to be free / Love who you love, because life isn’t guaranteed,” she concludes.

It’s a stunning and positive admission for a community such as American hip hop — which is plagued with homophobia and closeted, intersectional identities.

“Lesbian women are all too often erased or excluded from narratives surrounding LGBTQ people,” said Sarah Kate Ellis, GLAAD President and CEO, in a statement about the track.

“By sharing her truth with the world, Gloria Carter is increasing visibility of lesbian women of color at a critical time and sending a powerful message of empowerment to the entire LGBTQ community that is perfectly timed with the end of Pride Month.”

Read on for the best social media reactions to Gloria’s coming out. “4:44” is currently streaming exclusively on Tidal.

Gloria Carter has moved me to tears. #444 #pride #loveislove

But life is short, and it's time to be free
Love who you love, because life isn't guaranteed.
Smile. – Gloria Carter, a lesbian icon

Mother Gloria Carter giving us this poem at the end of "Smile" really took the thug in me out. Mascara? RUINED.

Nothing can destroy my mood today. Gloria Carter came out as a lesbian on her son's new album.