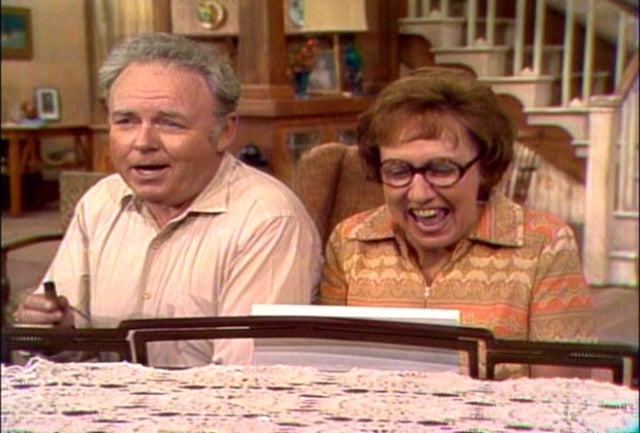 Jean Stapleton, the award-winning actress who played long-suffering Edith Bunker on the landmark 1970s television series of the "All in the Family," has died of natural causes. She was 90.

Stapleton, born Jeanne Murray, also worked on stage and in film, but was by far best known for her signature wail of "Aaaaaarchie!" on Norman Lear's iconic show about the working class family of Archie Bunker, played by Carroll O'Connor. She won three Emmys and two Golden Globes for her portrayal of Edith.

"It is with great love and heavy hearts that we say farewell to our collective Mother, with a capital M," Stapleton's son John Putch and daughter Pamela Putch, said in a joint statement. "Her devotion to her craft and her family taught us all great life lessons."

The shrill-voiced, big-hearted Edith, affectionately referred to by O'Connor's Archie Bunker as "dingbat," became synonymous with the actress on a show than ran for nine seasons and had more than 200 episodes.

Sally Struthers played her daughter on the cusp of the women's liberation movement while Edith represented the homespun values of wife and mother, effacing herself for the greater good of her family. But Lear's social message about a changing American society shone through Archie's abuse toward Edith, and Edith's acceptance of her subordinate role.

Though she was not a smart or well-educated woman, Lear would allow Edith to show moments of shocking perceptiveness — giving her lines that cut through Archie's stubborn bigotry to shame him into offering a human response to a problem or issue.

"Just a lot of love, unselfish love," Stapleton said of her character in an interview with the Archive of American Television.

It was a role she eventually outgrew. Her character was written out of the "All in the Family" follow-up "Archie Bunker's Place" after a single season. For good measure, the show's writers killed her off, explaining she died from a stroke.

Years later, while appearing with O'Connor on "The Donny and Marie Show" in 2000 she refused to reprise her signature voice, saying "I only do it for pay."

In addition to her small screen work, Stapleton was an accomplished stage actress, performing in such notable Broadway shows as "Funny Girl," "Damn Yankees" and "Bells Are Ringing."

Stapleton would win three Emmys and two Golden Globe awards for her "All in the Family" work and the fame that came with the role would lead to guest appearances on shows like "The Muppet Show" and "The Carole Burnett Show."

Though she left the spotlight once she abandoned Edith, she remained active on stage and screen, appearing in supporting roles in films like "You've Got Mail" and "Michael" and on programs like "Everybody Loves Raymond."

William Putch, Stapleton's husband of 30 years, died in 1983. She is survived by their two children, the actor and director John Putch and the actress Pamela Putch.