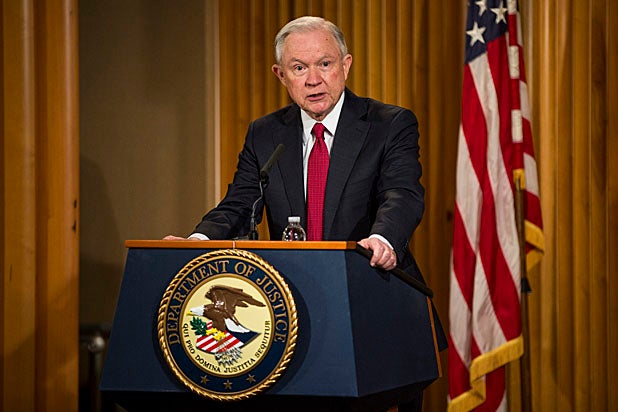 Attorney General Jeff Sessions has recused himself from any matters pertaining to the campaign of President Trump after acknowledging that he met with Russia’s ambassador during Donald Trump’s presidential campaign.

“I have recused myself in the matters that deal with the Trump campaign,” he said in a news conference where he also vowed not to participate in “any existing or future investigations of any matter relating in any way to the campaign or President of the United States.”

On Wednesday night, The Washington Post was the first to report on a private meeting between Sessions and Russian ambassador to the US. Sergey Kislyak, which took place in the senator’s office last September. The discussions fueled new congressional calls for the appointment of a special counsel to investigate Russia’s alleged role in the 2016 presidential election and the suspected hacking campaign, according to the Post.

“The Russian ambassador apparently sent a staffer to my office, I did not see them, and asked for a meeting,” Sessions said. “We set up a time… we met with him.”

Sessions said they discussed a trip the Attorney General took to Russia with his church group back in 1991, terrorism and the Ukraine, but doesn’t recall any political conversations.

On Feb. 13, Gen. Michael Flynn stepped down as Trump’s National Security Adviser after it came to light that he had been in contact with Russian officials before Trump took office.

Sessions said he shared with the White House that he planned to announce his recusal earlier on Thursday afternoon. He admitted “in retrospect” he should have disclosed that he met with a Russian official when he was asked about it during his AG confirmation hearing. When Democratic Sen. Al Franken asked him about contacts with the Russian government, Sessions said he had not had any.

“If there is any evidence that anyone affiliated with the Trump campaign communicated with the Russian government in the course of this campaign, what will you do?” Franken asked.

“I’m not aware of any of those activities,” Sessions replied. “I have been called a surrogate at a time or two in that campaign, and I didn’t have — did not have communications with the Russians.”

Democratic Sen. Elizabeth Warren is among those who have used Twitter to express outrage over Sessions’ meeting with the ambassador. The Massachusetts Senator called for Session to resign, adding, “This is not fake news.”

Sessions said at the news conference that his decision “should not be interpreted as confirmation of the existence of any investigation” because the Justice Department generally does not confirm investigations.