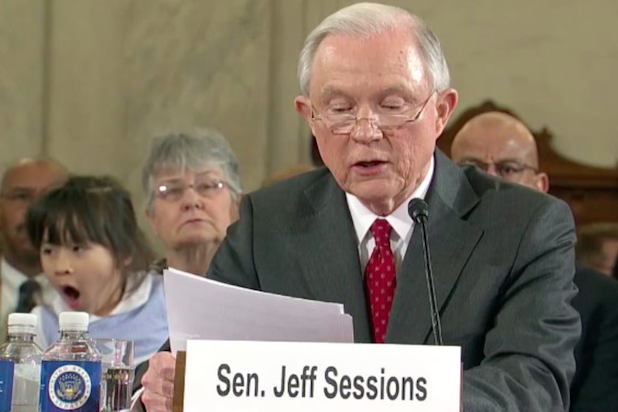 Jeff Sessions’ confirmation hearing for attorney general on Tuesday has been interrupted by a variety of protestors, ranging from a woman representing Code Pink to two men dressed up like KKK members.

Video emerged of the unidentified men posing as Klansmen being escorted out of Capitol Hill screaming, “You can’t arrest me, I’m white.”

“What is this craziness? I am a white man. You cannot take me out of here,” one protestor is heard shouting.

Meanwhile, CNN tweeted footage of a Code Pink supporter getting escorted out of the proceedings.

Sessions was selected to serve as attorney general in President-elect Donald Trump’s administration, and the decision is making a lot of people extremely nervous because of offensive comments the Alabama senator has made in the past.

Democrats, Trump haters and civil rights groups are attacking Sessions’ record as U.S. attorney in Alabama in the 1980s, especially on the heels of Steve Bannon’s appointment as Trump’s chief strategist.

Code Pink is a group that describes itself as “a women-led grassroots organization working to end U.S. wars and militarism, support peace and human rights initiatives, and redirect our tax dollars into healthcare, education, green jobs and other life-affirming programs.”

In 1986, President Ronald Reagan’s nomination of Sessions to a federal judgeship was rejected over racially charged comments he allegedly made as U.S. attorney in Alabama. He was only the second judicial nominee rejected by the panel in its 50-year history, despite having denied making the comments.

Sessions did, however, admit to saying that he was fine with the Ku Klux Klan “until I found out they smoked pot,” but called the remark a joke.

Sessions discussed these issues during his hearing on Capitol Hill.

“I abhor the Klan, and what it represents and its hateful ideology,” he said Tuesday.

Watch an ad, below, detailing why liberals don’t want Sessions to land the Attorney General gig: