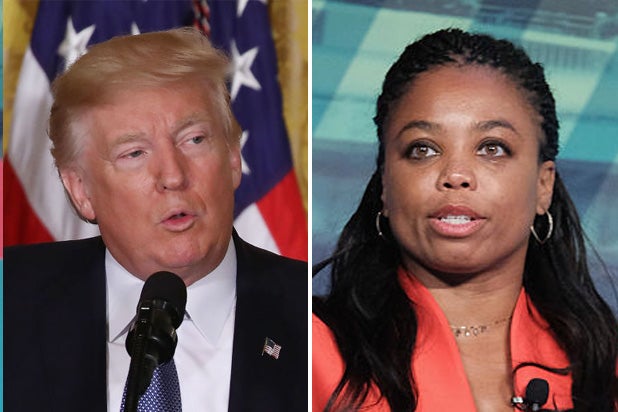 Clearly, President Donald Trump isn’t watching Jemele Hill and Michael Smith’s “SC6” — but that doesn’t mean that nobody is or that the network’s ratings have “tanked” since they took over the 6 p.m. time slot in February.

According to the most-recent quarter, the rebranded “SC6” is actually up a hair under 1 percent year over year in cable’s key adults 25-54 demographic, with an average of 233,000 viewers versus 231,000. Last year, a regular live “SportsCenter” owned the comparable hour.

In terms of total viewers, however, 6 o’clock is down 2,000 audience members, which effectively makes the rebranded hour materially flat.

The Nielsen numbers contradict the president’s assertions about the on-air performance of Hill, who was suspended by the network on Monday for a second violation of the company’s social media rules.

“With Jemele Hill at the mike, it is no wonder ESPN ratings have ‘tanked,'” Trump tweeted on Tuesday morning.

With Jemele Hill at the mike, it is no wonder ESPN ratings have "tanked," in fact, tanked so badly it is the talk of the industry!

It’s unclear who Trump is quoting there, but unfortunately for him, the claim is not quite correct.

What Trump could have criticized was ESPN’s subscribers. That’s the number that is sinking, as cord-cutting many millennials have shown little desire to pay $8 a month for the costliest cable channel.

Hill was benched for using Twitter a day earlier to call for a boycott of Dallas Cowboys-advertisers after team owner Jerry Jones demanded his players stand for the national anthem or be benched.

“Jemele Hill has been suspended for two weeks for a second violation of our social media guidelines,” ESPN said yesterday in a statement. “She previously acknowledged letting her colleagues and company do with an impulsive tweet.”

That line referred to her calling President Trump a “white supremacist” a few weeks back. (Yeah, these two have beefed before.) Hill had some unkind things to say about his supporters as well, though she got off with just a warning back then.