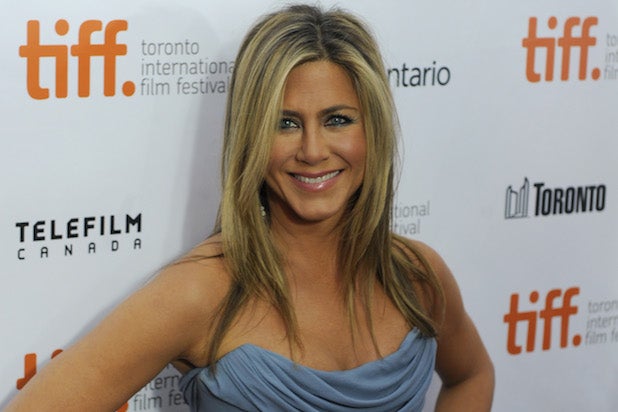 Jennifer Aniston has signed on to star in and executive produce the indie movie “Cake.”

Daniel Barnz (“Won’t Back Down”) will direct from Patrick Tobin’s script, which was voted to the 2013 Black List.

Aniston will play an acerbic woman named Claire who becomes fascinated by the suicide of Nina, a woman in her chronic pain support group. As she uncovers the details of Nina’s suicide and develops a poignant relationship with Nina’s husband, Claire also grapples with her own very raw personal tragedy.

Ben Barnz will produce with Kristin Hahn and Courtney Solomon, while Shyam Madiraju and Mark Canton will join Aniston as executive producers.

Conquistador Entertainment is handling sales for “Cake” at the European Film Market in Berlin.

“Cake” is the first film under a new deal between After Dark Films and Shenghua Entertainment, which produces Chinese television. The new company is called Cinelou Films and it will produce five movies over the next 18 months budgeted at between $7 million and $10 million.

WME Global will represent Cinelou and assist in the sourcing and packaging of its films.

“Of the zillions of Jennifer Aniston fans, I might be the biggest one of all,” Barnz said. “I’ve especially loved her more dramatic performances, and I can’t wait to watch her tackle a role that has such a brilliantly funny voice and so much raw pain (hats off to writer Patrick Tobin). I’m honored to be collaborating with Ben, Kristin and Courtney, and it’s exciting that ‘Cake’ will be the first film under the Cinelou banner. It feels like we’re all taking a leap of faith together, and that’s pretty thrilling.”

Also read:  15 of Jennifer Aniston’s Winners and Losers at the Box Office (Photos)

“I’m thrilled to be working alongside Courtney and Kristin, and so very appreciative of Cinelou’s commitment to ‘Cake.’ Patrick has penned a stunning script, and there’s no doubt Jennifer will amaze in a role that exploits both her comic and dramatic abilities. Daniel always gets terrific performances from his cast and brings great visual panache to his films,” added producer Ben Barnz.

The deal for “Cake” was negotiated by CAA and WME Global, which are repping the film together, and Scott Karol, on behalf of Cinelou and Conquistador.