The MLB Hall of Famer tweeted a photo Saturday night of Lopez’s hand with a humongous diamond ring and the caption, “She said yes.” 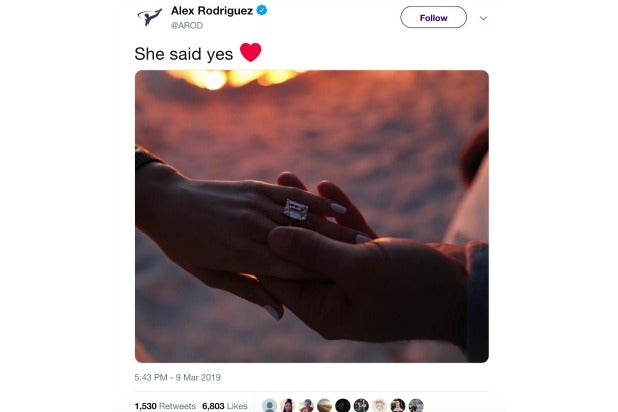 The music superstar and the baseball giant — who are appropriately dubbed J-Rod — met at a subway series game between the New York Mets and the New York Yankees at Shea Stadium in Queens, New York, in 2005. She was there to support her then-husband Marc Anthony, who threw our the opening pitch.

The couple began dating in the spring of 2017. Rodriguez first confirmed their relationship on March 31, 2017 on “The View.”

“She’s an amazing, amazing girl and one of the smartest human beings I’ve ever met — and also just an incredible mother,” the former Yankee and 14-time all-star said.

This will be JLo’s fourth marriage and ARod’s second. She was previously married to Cris Judd, Ojani Noa and singer Marc Anthony, with whom she shares 9-year-old twins, Max and Emme.

Rodriguez has two daughters Natasha, 12, and Ella, 8, with his ex, Cynthia Scurtis.