We couldn’t even get one day. With the Golden Globes this weekend and the Oscars not far around the corner in the busiest, most cramped month of awards season ever, the 31st annual Palm Springs Film Festival couldn’t wait a full day after New Year’s to throw us deep into glitzy tributes, emotional speeches and cute anecdotes.

We had that in abundance at Thursday night’s Film Awards Gala as hosted by Mary Hart, which honored 10 of the year’s likely Oscar contenders and gave each more than an opportunity for a dry run if they hit the stage of the Beverly Hilton this Sunday or the Dolby Theater early next month.

1. Antonio Banderas and Jennifer Lopez Are Thrilled to Be Here

To arrive in Palm Springs on time, Antonio Banderas wrapped up a performance of a play in Spain, hopped on a 17-hour flight to the U.S., had his tuxedo ironed, joked that he had himself ironed and then promised that he’d be likely to fall asleep on a table if given the chance. And though he’s had a long career and a lucrative film relationship with Pedro Almodóvar, his work on “Pain and Glory” is granting him a new opportunity to actually be a winner instead of just a nominee.

“I have been a nominee for many years, but I never got here. It’s true,” Banderas said. “I would sit down at those tables and I would hear the name of someone else. And you say to be a nominee is a very important thing. But you know I wanted to go up there.”

Jennifer Lopez feels the same way. We know she’s been showered with accolades throughout her career, but being recognized for her performance in “Hustlers” feels new, and in an emotional speech in front of the Palm Springs crowd, you could tell she knew it too.

“There was something that spoke to me about this film. Not only at this time in my life, but at this time in my world. I was offered an opportunity to shine a light on women who are usually spinning on the periphery of the action,” Lopez said. “I immediately felt like I had to get this film made, no matter the obstacle. A survivor just trying to get her piece of the American dream.”

She thanked her fiance Alex Rodriguez as the camera cut to someone in the crowd who was definitely not A-Rod. And she also graciously thanked the award’s presenter, “Hustlers” writer and director Lorene Scafaria, and reminded the crowd that “Hustlers” is a movie made largely by women, something that will likely be a recurring theme of JLo’s awards push but something that can’t be said enough.

You can’t gauge a front-runner just from enthusiasm alone, but Greta Gerwig gave some effusive praise when she got the chance to gush about Quentin Tarantino for a few moments. The “Little Women” director said she was thrilled to know that both her film and Tarantino’s would be made by Sony and was giddy that they’d each share the same logo.

She frequently grilled studio boss Tom Rothman about what he was thinking and working on and his tools of the trade. And she remembered a story where she was in awe that Tarantino broke down a specific shot from her movie “Greenberg” as though he had made the movie himself. And in the process, Gerwig compared Tarantino to everything from Bobby Fisher to a comet in how, like a shooting star, he makes movies that make you leave the house and look up into the dark.

Her speech was so moving to Tarantino that it almost left him speechless, which is saying something.

“She literally talked about me in a way I could only imagine someone would ever talk about me in my wildest, self-possessed dream. Thank you. I mean, my God, thank you so much,” Tarantino told her from the stage. “My joke that I say is when people talk about me, speak about me as if I were dead. And they never do! And you did.” 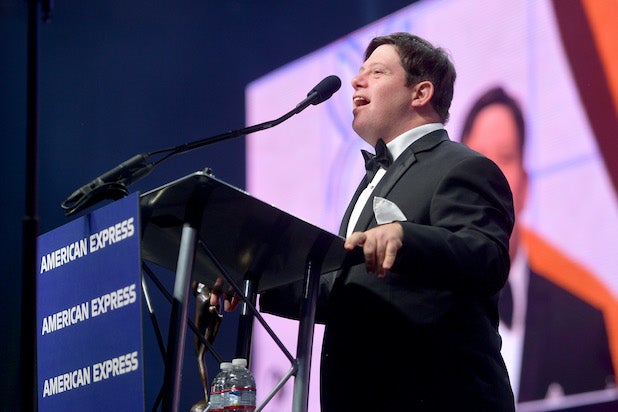 3. Zack Gottsagen Can Steal the Show

There was a lot of star power on display Thursday, but “The Peanut Butter Falcon” breakout star Zack Gottsagen won a standing ovation from the crowd as he accepted Palm Springs’ Rising Star Award. Gottsagen, who has Down syndrome, was ecstatic to be accepting an award from his directors, Tyler Nilson and Michael Schwartz, and to do so while his mom was in attendance.

“Everything about what they do is follow their hearts and follow their dreams,” Gottsagen said of his cast and crew on the film. “But guess what: This is my dream came true right now.”

He closed his speech with a quote from the movie that served as a welcome invitation to the crowd: “What’s rule number one? Party.”

4. Quentin Tarantino and Martin Scorsese Are Concerned About the Future of Cinema

Both Tarantino and Martin Scorsese used their acceptance speeches to ponder the future of cinema. Tarantino said that years ago, people like Scorsese or himself were never asked what they thought cinema would look like even five years from now, but now they’re asked all the time. And though he doesn’t know exactly how most people will watch movies even a few years from now, he chose to work with Sony on “Once Upon a Time … in Hollywood” because Tom Rothman committed not to DVD or streaming but to getting “asses in seats.”

And while Scorsese continued to thank Netflix for allowing him the opportunity to make “The Irishman” the way he intended, he said he was “concerned” about algorithms turning people into “movie watchers” and not “moviegoers.” The pressure to binge-watch and access everything that’s available puts the burden on you as a viewer, Scorsese said, and real discovery depends on you making up your own mind about your viewing.

“While the art of course can’t survive without the business, I have to say the business isn’t going to survive without the art, which is made by people with something to say,” Scorsese said. “Every individual filmmaker amounts to more than the number of awards they won or the amount of money the pictures make. And every individual viewer, you, amounts to more, much more, than the data that is being collected about them.”

5. Give Robert De Niro an Opening, and He’ll Take It

Here we go. Perhaps mercifully after over three hours into the show, Robert De Niro took the stage to present Martin Scorsese with the final award of the night, the Sonny Bono Visionary Award, named for the late entertainer who catapulted from music and TV fame to become mayor of Palm Springs and then a U.S. congressman. And while De Niro isn’t always one for a lot of words, he isn’t shy to make things political when he has the chance.

“I’m also happy to honor the memory of Sonny who started this great festival. Sonny was a Republican,” he said to some applause and jeers in the crowd, “back in the days when Republicans still supported the arts, believed in science and could put partisanship aside to champion what’s best for our country.”

We’re guessing there’s more from De Niro where that came from.