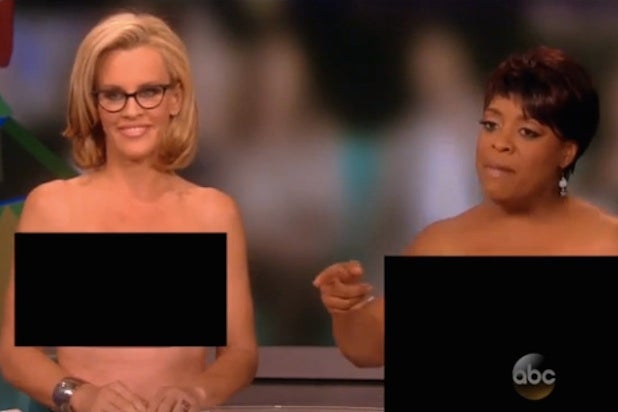 Jenny McCarthy and Sherri Shepherd gave their studio audience a “view” most of them hadn’t seen before, unless they read “Playboy” back in the day when McCarthy was a Playmate.

During a discussion about a recent episode of HBO’s “Girls” where Lena Dunham revealed some racy underwear that left little to the imagination, the two panelists apparently went topless to conclude their show on Monday.  It’s unclear if the ladies were completely topless, since their assets were obscured by black bars.

“Thank you, thank you!” McCarthy exclaimed to the hooting and hollering crowd.

“You know Lena, she gets press every week for being naked,” Shepherd observed. “So we’re jumping on the bandwagon!”

“Wait a minute!” interjected Shepherd. “Look at my box. Why is my black box so much bigger than yours”?

“Take a little time to enjoy our view!” McCarthy quipped.

McCarthy then apparently surprised Shepherd by grabbing her breasts.

Watch the two get naked below: