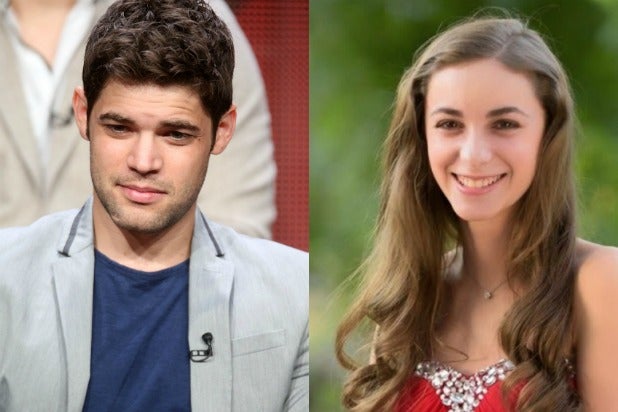 “Supergirl” star Jeremy Jordan, who has passionately fought for the release of his cousin, Sarah, from a so-called “ex-gay” camp says she’s finally returning home.

“Great news! She’s out! In 5 days, you helped Sarah get released,” Jordan tweeted on Thursday. “Details on the GFM page. THANK YOU. #SaveSarah“

Over last weekend, the actor begged fans to help rescue his 17-year-old cousin from an “ex-gay” conversion camp in Texas, where Jordan says she was placed against her will by her own parents.

“Meet my cousin Sarah. At 17, her future looks bright. She is in the top 10% of her class, runs cross-country and belongs to the National Honor Society and the debate team. She is also gay,” Jordan wrote on his Facebook page.

“Like any high school kids in a relationship, Sarah and her girlfriend wanted to go to prom together,” he continued. “But when they did that, Sarah’s parents, who believe that homosexuality is a sin and abnormal, sent Sarah away against her will to an East Texas Christian boarding facility for troubled teens to ‘pray away the gay.'”

However, the founder of the facility, in Hallsville, Texas, east of Dallas, has denied that Sarah was being held there against her will and undergoing gay conversion therapy.

Gregston went on to claim that Sarah is “no longer” at Heartlight which he called a “residential counseling program for teenagers who struggle with a wide range of behavioral and emotional issues.”

Visitors to Heartlight’s official website also get a pop up message from the founder, denying media reports that “this young woman” was held against her will, and claiming that elements of her story were made public without her consent.

Also Read: Colton Haynes Officially Comes Out As Gay: 'It Took Me So Long to Get to This Point'

Earlier this week, Jordan set up a GoFundMe campaign to help cover legal expenses to get Sarah released from the facility. So far, the page has raised more than $64,000 toward its $100,000 goal.

At least one Hollywood friend has already agreed to help. Colton Haynes, the former “Arrow” star who recently came out as gay, has contributed $5,000 to Jordan’s campaign.

This absolutely breaks my heart. Pls help Jeremy Jordan's cousin be her true self. #FreeSarah . Join me & donate. https://t.co/Iroz5nN8W4

Help #SaveSarah from a year of useless, damaging therapy. https://t.co/fb33X4tqJ2

Texas State law allows parents to place their children in a residential boarding facility until they turn 18.

Read his emotional plea in full below.

Meet my cousin Sarah. At 17, her future looks bright. She is in the top 10% of her class, runs cross-country and belongs to the National Honor Society and the debate team. She is also gay. Like any high school kids in a relationship, Sarah and her girlfriend wanted to go to prom together. But when they did that, Sarah’s parents, who believe that homosexuality is a sin and abnormal, sent Sarah away against her will to an East Texas Christian boarding facility for troubled teens to “pray away the gay.”

Not only does this type of “therapy” not work, mental health professionals from organizations like the American Medical Association and the American Academy of Pediatrics have found it to be psychologically damaging, especially for minors. And Sarah has been told that she must stay in this facility for a whole year. So instead of being surrounded by friends and extended family who love and support Sarah for who she is, she’ll be isolated in a place where the fact that she is gay is treated as a sin and an illness. Instead of preparing for college and competing in the state debate tournament, she’ll be doing forced labor every day and enduring Bible-based “therapy” for her “disease.”

She is not allowed phone calls or email or any form of computer communication. She is also not allowed visitors and cannot leave the property. She is completely cut off from the outside world. She tried to run away, but was caught by the staff and returned to the facility.

Sarah’s extended family and close friends are trying to win her release through the legal system, but it’s not cheap. Attorney’s fees in the first few weeks have already exceeded $20,000, and they are continuing to mount, with a full hearing set for July. Sarah needs your help. But this is about more than just one gay kid – if we free Sarah we can help show that it’s not okay to try to make gay teens straight by sending them away and using the threat of God against them.

Spread the word so being gay doesn’t mean losing freedom for Sarah. #savesarah.