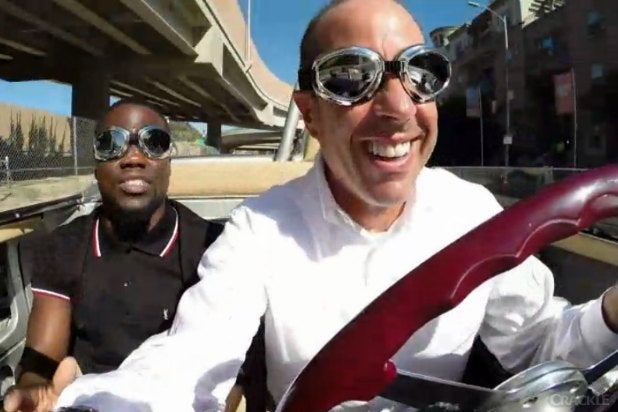 Sorry Crackle, Jerry Seinfeld has signed a deal to make the streaming king the new home of “Comedians in Cars Getting Coffee.” Additionally, the NBC sitcom icon will film two new stand-up comedy specials for Netflix, the first of which will land later this year.

Netflix’s “Comedians in Cars” will post 24 new episodes of the classic auto/cup o’ joe show. New episodes are set to premiere in 2017, with another batch dropping in 2018 and beyond. All 59 pre-existing episodes will come to Netflix as well.

Also as part of the deal, the “I’m Telling You for the Last Time” and “Comedian” star will help develop other scripted and unscripted comedy programming for Netflix.

“Jerry is known the world over as both a great TV innovator and beloved comic voice,” said Ted Sarandos, Netflix’s chief content officer in an annoucement. “We are incredibly proud to welcome him to the Netflix comedy family.”

“When I first started thinking about Comedians in Cars Getting Coffee,’ the entire Netflix business model consisted of mailing out DVDs in envelopes. I love that we are now joining together, both at very different points,” said Seinfeld, who produces, directs and hosts the show, in the statement. “I am also very excited to be working with Ted Sarandos at Netflix, a guy and a place that not only have the same enthusiasm for the art of stand up comedy as I do, but the most amazing technology platform to deliver it in a way that has never existed before. I am really quite charged up to be moving there.”