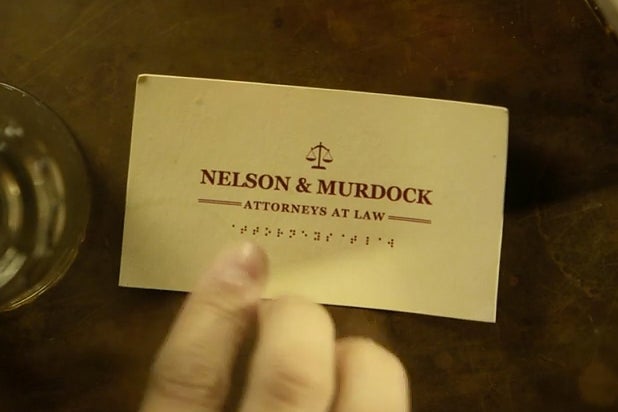 A brief bit of teaser footage from “Jessica Jones” has directly referenced the Marvel superhero’s link to her fellow Hell’s Kitchen vigilante “Daredevil.”

The 11-second clip posted to Twitter Monday shows (presumably) Krysten Ritter as her titular character sitting at a bar and pounding a shot of whiskey.

As she slams the glass back down, she’s seen reaching for a business card — that of Nelson & Murdoch, Attorneys at Law.

The footage does not appear to have been taken from “Jessica Jones” itself. The tweet was captioned, “You never know who you might run into around Hell’s Kitchen.”

“Daredevil” premiered in April, while “Jessica Jones” debuted over the past weekend. Along with the upcoming “Luke Cage” and “Iron Fist,” the titular heroes are all expected to join forces for team-up series “The Defenders.”

You never know who you might run into around Hell's Kitchen. #JessicaJones https://t.co/aPlLoo8Xnn