CNN’s Jim Acosta is looking into his crystal ball at the not-too distant future and what he sees concerns him – “a nation of bullies” and the “Bully-in-Chief” making “a comeback.”

“We are becoming a nation of bullies and the bullied,” Acosta observed.

He argued that the GOP’s continued support for the twice-impeached president is sending a ripple effect across the nation. Incidents of anti-vaxxers shouting at mask-wearers, knocking over COVID testing booths and intimidating school officials are microcosms of Trump and his allies in federal and local governments, he explained.

In the wake of recent violence against public school employees, the Biden administration ordered the FBI and Department of Justice to devise protective measures on Oct. 5. Acosta played a clip of Republican Senator Josh Hawley of Missouri comparing the order to the “McCarthy era.”

Meanwhile, Trump allies are adopting a similar stance of non-compliance regarding the Senate Judiciary Committee’s investigation of the Jan. 6 insurrection. Despite a “growing mountain of evidence … alleging Trump and his top aids tried to bully justice Dept officials into investigating bogus claims of voter fraud,” Steve Bannon has already pledged to defy his subpoena. 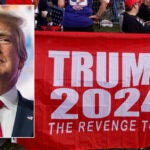 Acosta asserted that the “batshit crazy nonsense on [Bannon’s] disinformation podcast” – including promises that Trump will be “back in office” by 2022 – is reflected by the lack of consequences for the insurrectionists and the Trump officials who helped enable them.

“If the bullies and enablers can continue to gaslight us with their lies … then no wonder the bully-in-chief is plotting his comeback,” said Acosta.

The centerpiece of Acosta’s segment: Trump’s “twisted and evil” remarks during a recent appearance on Fox News about Haitian immigrants.

After debunking this statement (“not that the facts really matter to him”), Acosta pointed out that Haitians are just the latest Trump targets in a long list ranging from Mexicans to Muslims. All of which, he argues, makes those who will stand with Trump in Iowa more despicable – and troubling.

“If it sounds like a bad sequel, we can only imagine what the closing scene of that sequel looks like,” Acosta warned, as footage of Trump flags and other white nationalist flags played in the background. “Which flags will the bullies drape across the Capitol: ours or his?”

Watch Jim Acosta’s segment in the clip up top.