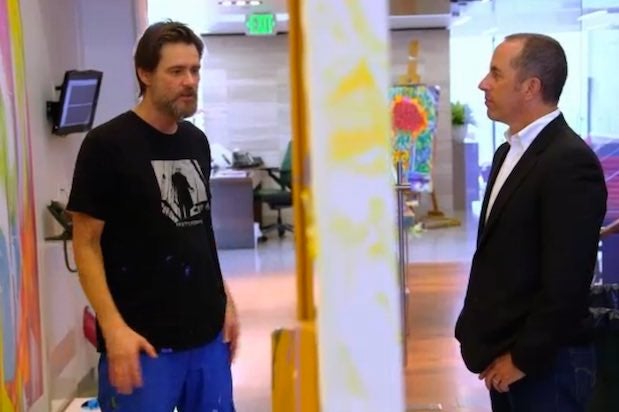 Jerry Seinfeld revved up a 1976 Lamborghini Countach and sped off to Jim Carrey‘s estate for the latest episode of “Comedians in Cars Getting Coffee.”

After the “Ace Ventura” funnyman offered up an unconventional entrance to the web series, the duo headed to Killer Cafe in Marina del Rey for cups of java and conversation, where Carrey even supplied his own sweetener. Seinfeld added huevos rancheros to the experience, but Carrey, on Day 21 of a cleanse, stuck with the coffee and the comedy.

Then, in true Carrey fashion, the “Dumb & Dumber” star — who is on his way to a five-day silent retreat — got pretty philosophical, or at least a little cynical. Laughter, he explained, is a feeling of superiority. Carrey also believes that death will be welcome to us all in the end.

The joy returned to the episode when Carrey graciously shared his art studio with Seinfeld and Crackle viewers — the first time he’s ever opened it to a fellow comic or the public.

“This is just the womb for me,” Carrey said. “I just love paint. I love the colors, I love everything about it.”

The man behind “The Mask” concluded: “I could disappear from show business forever and feel wonderful about what I’ve done, what I’ve experienced, what I’ve been given — but I am always grateful that wherever I go somehow I did something that makes people brighten … and that is a wonderful thing somehow.”