Jim Carrey has a beef with Special Counsel Robert Mueller, and he’s not letting it slide without speaking up.

“You let us down Mr. Mueller. You saw obstruction and washed your hands of it,” Carrey wrote in his latest artwork, which he posted Sunday. “Not indicting a President is a memo, not a law. You let a tyrant skate with ‘I don’t remember’. You gave the enemy a leg up. Live with that…’PROSECUTOR’.”

The Mueller Report has come under scrutiny since Attorney General William Barr delivered the full report to Congress and posted the complete document (with redactions) online April 18. Dashing many liberal hopes, the report found no evidence of organized collusion between the Trump campaign and Russia, and Mueller declined to indict the president on obstruction of justice charges.

“There was relentless speculation in the news media about the president’s personal culpability, yet as he said from the beginning, there was, in fact, no collusion,” Barr told reporters during a press conference in advance of the report’s release.

Check out Carrey’s work of art below. 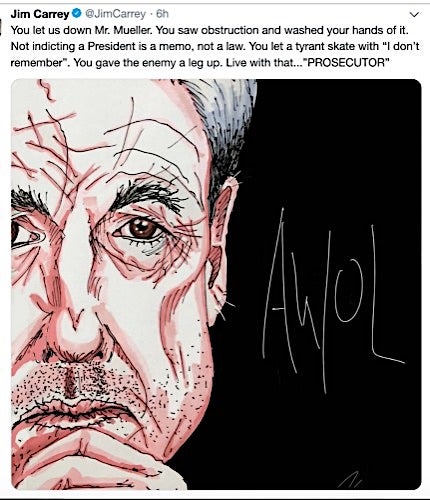