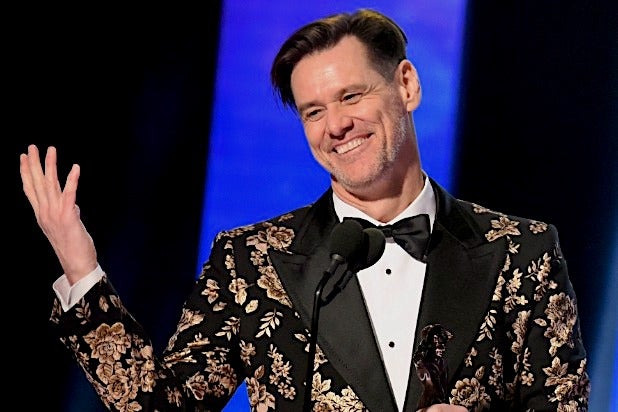 Jim Carrey is horsing around with President Trump again.

In the actor’s latest object d’art, the POTUS is depicted as a horse’s ass – literally — blond mane (um, tail) waving in the wind and all.

While praising CNN’s Chief White House Correspondent Jim Acosta for his “remarkable restraint” when Trump ridiculed him during a press conference, Carrey’s latest artwork also stuck it to the president, blasting him for destroying the First Amendment. It shows Acosta in the foreground with a horse’s rump standing behind microphones at the POTUS’ podium.

“[email protected] has comported himself with remarkable restraint while dealing with this Imposter-in-Chief. But as people in Hollywood have long known — everything is harder when you’re working with animals,” Carrey wrote as the artwork’s caption.

.@acosta has comported himself with remarkable restraint while dealing with this Imposter-in-Chief. But as people in Hollywood have long known — everything is harder when you're working with animals. pic.twitter.com/5sQGaEgeeT

On Wednesday — the day after the midterm elections — Trump called Acosta a “terrible person” to his face after the journalist repeatedly questioned him in an East Room press conference. “CNN should be ashamed of itself having you working for them. You are a rude, terrible person. You shouldn’t be working for CNN,” the president said.

Acosta was later denied entry to the White House and his “hard pass” press credential had been revoked.

Shortly thereafter, White House Press Secretary Sarah Huckabee Sanders was accused by media critics of using doctored video footage posted by a InfoWars personality to accuse Acosta of “inappropriate behavior” when an intern tried to take a mic from him.