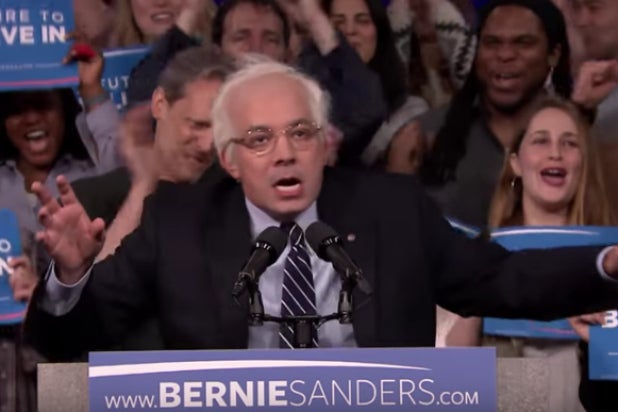 Jimmy Fallon is good at impressions, but when it comes to impersonating Bernie Sanders, the “Tonight Show” host’s got nothing on Larry David.

Still, Fallon did his thing on Wednesday in a two-and-a-half minute sketch set after Sanders’ big New Hampshire primary win. Let us know in the comments section below if you think he keeps up with the “Curb Your Enthusiasm” star or not.

Either way, the jokes were good — or at least topical. Fallon even works in a Beyonce “Formation” quip at the end, a musical moment which will either have you dancing or thinking about Sanders and his wife having sex.

On Marco Rubio: “I even asked Marco Rubio to help me with my speech tonight, but he just handed me a piece of paper with the words ‘Good Evening’ written on it 800 times — he’s losing it!”

On Hillary Clinton: “I’m speaking tonight to claim victory in the New Hampshire primary over She-Who-Shall-Not-Be-Named.”

On “himself,” Sanders: “You are the candidate who looks a ‘Scooby-Doo’ villain before his mask is removed.”