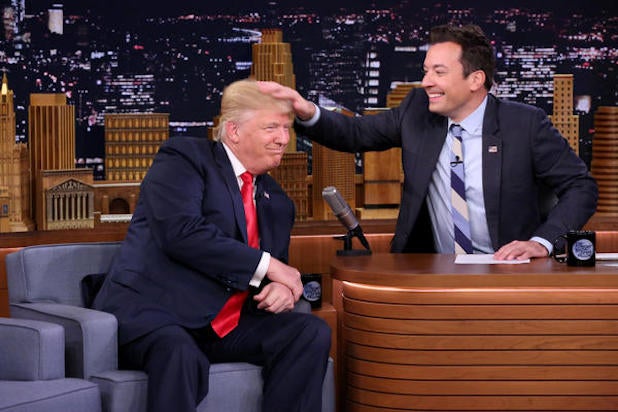 Jimmy Fallon has broken his silence about his interview with Donald Trump last September, saying he was “devastated” with all the backlash he faced.

“I’m a people pleaser,” he said in a New York Times interview that was published Wednesday. “If there’s one bad thing on Twitter about me, it will make me upset. So, after this happened, I was devastated. I didn’t mean anything by it. I was just trying to have fun.”

In September, Fallon had Trump as a guest on “The Tonight Show.” In the now infamous interview, the host asked Trump if he could ruffle his hair.

Fallon faced a lot of backlash for playing with Trump’s hair, with many commenting on how Fallon shouldn’t have let Trump off the hook for his racist and sexist comments while on the campaign trail. He was also widely criticized for being too soft on the divisive then-presidential candidate, with many accusing Fallon of “normalizing” Trump. Comedian Billy Eichner, for example, slammed Fallon, saying it wasn’t “a good moment.”

Fallon defended the interview, saying “Have you seen my show? I’m never too hard on anyone. We’ll have Hillary [Clinton] on tomorrow, and we’ll do something fun with her too.”

Now, Fallon said he didn’t play with Trump’s hair to “humanize him” — in fact, he “he did it to minimize him.”

“I didn’t think that would be a compliment: ‘He did the thing that we all wanted to do,'” Fallon explained.

Also Read: David Letterman Criticizes Jimmy Fallon for Being Too Soft on Trump: 'You Have an Obligation'

Fallon said he understands now that he should’ve talked about it on air when the backlash didn’t subside, even after a couple of days: “I didn’t talk about it, and I should have talked about it. I regret that.”

And although he was upset that people didn’t like his Trump interview, that event wasn’t going to force him to make changes at “The Tonight Show.” Because in the end, Fallon explained, he wants his show to be where people get their entertainment and their laughs.

“I don’t want to be bullied into not being me, and not doing what I think is funny,” he said more defiantly. “Just because some people bash me on Twitter, it’s not going to change my humor or my show.”